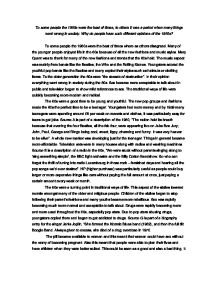 To some people the 1960s were the best of times where as others disagreed. Many of the younger people enjoyed life in the 60s because of all the new fashions and music styles. Mary Quant was to thank for many of the new fashions and trends that the 60s held. The music aspect was mainly from bands like the Beatles, the Who and the Rolling Stones. Youngsters adored the youthful pop bands like the Beatles and many copied their styles such as haircuts or clothing items. To the older generation the 60s were “the decade of destruction”. In their opinion everything went wrong in society during the 60s. Sex became more acceptable to talk about in public and television began to show mild references to sex. The traditional ways of life were quickly becoming more modern and radical.

The 60s were a good time to be young and youthful. The new pop groups and fashions made the 60s the perfect time to be a teenager. Youngsters had more money and by 1959 many teenagers were spending around £8 per week on records and clothes, it was particularly easy for teens to get jobs. Source A is part of a description of the 1960, “The nation held its breath because that evening the four Beatles, all the fab four, were appearing live on Juke Box Jury; John, Paul, George and Ringo being cool, smart, lippy, charming and funny. It was very heaven to be alive”. A whole new market was developing just for the teenager. Things in general became more affordable. Television sets were in many houses along with radios and washing machines. Source E is a description of a radio in the 60s, “We were stuck without parents singing along to ‘sing something simple’, the BBC light orchestra and the Billy Cotton Bandshow. So who can forget the thrill of tuning into radio Luxembourg in those rock – famished days and hearing all the pop songs we’d ever desired”. HP (higher purchase) was particularly useful as people could buy larger or more expensive things like cars without paying the full amount at once, just paying a certain amount every week or month.

The 60s were a turning point in traditional ways of life. This aspect of the sixties lowered morale amongst many of the older and religious people. Children of the sixties began to stop following their parent’s fashions and many youths became more rebellious. Sex was rapidly becoming much more normal and acceptable to talk about. Drugs were rapidly becoming more and more used throughout the 60s, especially pop stars. Due to pop stars abusing drugs, youngsters copied them and began to get addicted to drugs. Source G is part of a biography entry for the singer Janis Joplin, “She formed the Kozmic Blues band (1969), and then the full tilt Boogie Band. Always given to excess, she died of a drug overdose in 1970.

The pill became available to women and this meant that women could have sex without the worry of becoming pregnant. Also this meant that people were able to plan their lives and have children when they were better suited. This could be seen as a good and also a bad thing. It was good because people could plan their lives but it was also bad because traditionalists believed that it was unnatural and wrong. Also a big increase in sexually transmitted diseases occurred.

The “swinging sixties” were a great time to be young because of the new music and fashions. However it was a bad time to be older and see the traditional methods of life slipping out of the window.

Although there was an increase in the standard of living, people were still unemployed and poverty still occurred.

Different people have such different ideas because of bias, a different view or opinion of the world. This could be due to intelligence, age, gender, or possibly religious beliefs. Source F is an article in the Daily mail from 25th May 1964. It is about a woman named Mary Whitehouse who comments that the BBC is being biased against her and many other people’s Christian faith beliefs. Due to this she launches a campaign to get authors whose work is ignored by the BBC to be screened but only if their writing is about Christianity from a positive perspective. “Authors who speak strongly for the established Christian faith and write plays which inspire a sense of purpose and hope find it extraordinarily difficult to get their work accepted”.

Also people had different opinions about the new and modern way of life (radical) and the traditional more religious way of life. Many of the older generation and the religious people believed that the younger generation were going down the wrong path, however the youngsters were enjoying life and didn’t care much about what the older people thought. Technology was also agreeing with the radical lifestyle, new items like the pill which allowed women to sleep with men without the worry of an unwanted pregnancy and also helped families to plan their lives were brought out.

There is not just one answer to why people had opposing feelings about the 1960s. Nevertheless there are many potential answers, possibly because of age, gender or perhaps intelligence or religious beliefs.