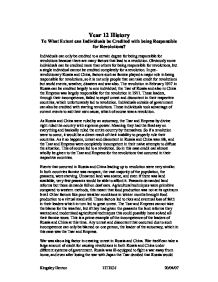 To What Extent can Individuals be Credited with being Responsible for Revolutions?

The war with Japan brought great unrest to Russia and sparked a wildfire of revolutionary ideas that flooded the country. The vast amount of resources and man power that WWI consumed from Russia was crippling. Food shortages were widespread enough, but now the soldiers needed to be supplied with food which meant less for everyone else, even worse, farmers and peasants were begin sent to war which meant less food production. Railway workers were also sent to fight, this meant an already inefficient railway system was brought to a snails pace. Worse still the Tsar decided that he would go to the front to lead his soldiers, this meant that any defeat could be blamed solely on the Tsar. Similarly in China the Empress was faced with a western invasion, China's military was unable to match the might of western firepower. Westerners won many battles and forced China to sign an unfair treaty which opened up her ports for trade. Westerners flooded China with cheap merchandise and opium, this led to great discontent amongst merchants and peasants. In both cases discontent and unrest was caused directly by the Tsar and Empress' inability to achieve military victory. Again blame can almost solely go to the Tsar and Empress, and with their inability to subdue the resultant unrest, they can almost solely take credit for causing the impending revolutions. ...read more.

On a larger scale, the majority of the population of both China and Russia can be credited with causing revolutions, that is the peasants, because without them no revolution would have had occurred in the first place. It was the peasants and proletariat that wanted changes, if they were happy with their government they would not have wanted change, and revolutionaries would have been laughed and scoffed at. So to some degree all the credit should go to the peasants, but of course if they were unhappy then there would need to be a cause of this discontent and credit would need to be given to the cause of discontent for the impending revolution. And also to those individuals that helped push the revolutions along (revolutionaries). Therefore the extent to which individuals can be credited with causing revolutions is entirely dependent on their involvement in causing discontent and unrest within the vast majority of the population. For example, the Tsar and Empress take most of the credit for the revolutions that occurred as a result of their incompetence as it was them that started it all, whereas revolutionaries can only take a small amount of credit in comparison to the Tsar and Empress as they are only helping the revolutions along basically taking advantage of the situation that the Tsar and Empress created to aid them in their cause, which lets face it was to put themselves in power. ?? ?? ?? ?? Kingsley Denton 12THOJ 20/04/07 ...read more.