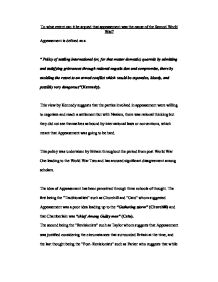 To what extent can it be argued that appeasement was the cause of the Second World War?

To what extent can it be argued that appeasement was the cause of the Second World War? Appeasement is defined as a " Policy of settling international (or, for that matter domestic) quarrels by admitting and satisfying grievances through rational negotiation and compromise, there by avoiding the resort to an armed conflict which would be expensive, bloody, and possibly very dangerous"(Kennedy). This view by Kennedy suggests that the parties involved in appeasement were willing to negotiate and reach a settlement but with Nazism, there was rational thinking but they did not see themselves as bound by international laws or conventions, which meant that Appeasement was going to be hard. This policy was undertaken by Britain throughout the period from post World War One leading to the World War Two and has aroused significant disagreement among scholars. The idea of Appeasement has been perceived through three schools of thought. The first being the "Traditionalists" such as Churchill and "Cato" whom suggested Appeasement was a poor idea leading up to the "Gathering storm" (Churchill) and that Chamberlain was "chief Among Guilty men" (Cato). The second being the "Revisionists" such as Taylor whom suggests that Appeasement was justified considering the circumstances that surrounded Britain at the time, and the last thought being the "Post- Revisionists" such as Parker who suggests that while the circumstances were significant for appeasement, there were alternatives that could have been taken advantage of. The weaknesses of the treaty of Versailles persuaded Britain to pursue a policy of Appeasement; due to the European tensions it caused especially economic tensions for example. Keynes argued that by weakening Germany, Western allies would also be weakened, and fundamentally a weaker Europe would ensue. But Keynes was outspoken during his time but through the inter-war period his views became increasingly accepted, as it was Britain's main foreign policy by trying to revise the treaty in order to settle any legitimate grievances that Germany had. ...read more.

However Mussolini and Hitler broke the agreement and sent extensive help to Franco. Hitler realised that Britain and France would not take a stand. This was a huge risk but as Britain was following Appeasement, Hitler took his chance taking advantage of the situation. The league initially called for the withdrawal of foreign participation, but did nothing to back up its demands, and by this stage in time the league had come to be recognised as a spent force. British opinion on the breach of the non-intervention policy was mixed. Some of the left wing groups for example, the I.L.P and the Communist Party wanted the government to support the republic against Spanish fascism, however the Labour part under its new leader did not want to become involved and Chamberlain was determined on non-intervention as he saw "no sense in preparing for war over a quarrel in a country so far away that we know little of." Anthony Eden also supports the policy of non-intervention. "The policy of non-intervention has limited and bit-by-bit reduced the flow of foreign intervention in arms and men into Spain. Even more importantly, the existence of that policy, the knowledge that many governments, despite all discouragement were working for it, has greatly reduced the risk of a general war... Six months ago, I told the house of commons of my conviction that intervention in Spain was both bad humanity and bad politics. Nothing that has happened since has caused me to modify that judgement; some events have caused me to confirm it. "Clearly Anthony Eden is in strong support of the non-intervention policy. He feels that by all European powers promoting this policy the risk of a general war is substantially reduced. Therefore he favours the system of collective security promoted by the League of Nations. Having this in mind therefore it can be argued that the non- intervention policy allowed Hitler to take advantage of his situation, undermining Appeasement suggesting that it did contribute to causing the Second World War. ...read more.

This letter clearly disapproves of the actions and decisions, which took place in Munich. It also questions the policy of appeasement, in that the letter criticises the fact that Hitler and Mussolini are time and time again getting their demands met. The letter also attacks Britain and France for not supporting Czechoslovakia especially when France had an agreement with her. It places sole responsibility on Britain and France for the state of Czechoslovakia. A year later Hitler broke the agreement, and sent German troops to occupy Prague. Chamberlain reacted at once claiming that Hitler had gone too far and must now be stopped. There are mixed opinions towards this policy, and the question why historians have debated appeasement continuously over the passing decades. Many believe that Chamberlains policy of appeasement was fuelled by a desire to do everything in his power possible to avoid war, and his belief that all European powers shared the same feeling. The catastrophic events of World War one set in a deep fear and hatred of war among many. We can see this from all the situations he gave into German grievances, and to some it may show the weakness in Appeasement because it gave Hitler the confidence to take advantage of his situation. However It is also felt that Chamberlain followed the policy of appeasement as a means to buy some time as he realised that British defences were hopelessly inadequate, as British military strength had been greatly reduced due to the commitment of disarmament. Even at the time of the Anchluss Britain was declared unprepared for war. Therefore it seems more persuasive to conclude, whatever the reasons for the continual policy of appeasement, it can be said that appeasement with the sole aim of preventing war did not succeed, however what it was seen to do was prolong the inevitable. Many strongly feel that the continual demands of Hitler were flared by the lack of opposition, and his continual greed for expansion, his demands were rarely attacked, simply given into with little hesitancy. 1 A.J.P Taylor - The origins of the Second World War -pg. 52. ...read more.