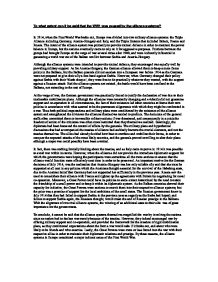 To what extent can it be said that the WW1 was caused by the alliance systems?

To what extent can it be said that the WW1 was caused by the alliance systems? In 1914, when the First World War broke out, Europe was divided into two military alliance systems: the Triple Alliance including Germany, Austria-Hungary and Italy, and the Triple Entente that included Britain, France and Russia. The intent of the alliance system was primarily to provide mutual defence in order to maintain the power balance in Europe, but the nations eventually came to rely on it for aggressive purposes. Frictions between the groups had brought Europe on the verge of war several times after 1900, and were indirectly influential in generating a world war out of the Balkan conflict between Serbia and Austria-Hungary. Although the alliance systems were intended to provide mutual defence, they encouraged war equally well by providing military support. As for Austria-Hungary, the German alliance allowed them to keep a more fierce policy in the Balkans, but the Balkan quarrels did not escalate into a European war before 1914 as the Germans were not prepared to give their ally a free hand against Serbia. ...read more.

The decisions of the general staffs often committed them to irreversible military actions if war threatened, and consequently in a crisis the freedom of action of the ministers was often more restricted than they themselves realized. Seemingly, the diplomats had been bereaved the control of affairs by the generals. The military plans and hypothetical discussions that had accompanied the treaties of alliance had suddenly become the crucial elements, and not the treaties themselves. The allies had already decided how best to combine and mobilize their forces, in order to conquer the expected attacks of the most likely enemies, and the generals proved unwilling to alter their plans although a major war could possibly have been avoided. In fact, there was nothing formally binding about the treaties, and as Italy came to prove in 1914 it was possible to avoid war within its terms. However, when the alliances did not provide the immediate diplomatic support for which the governments were hoping the participants were sometimes all the more anxious to ensure that the alliance would function more effectively next time in order to be preserved. ...read more.

The Russian government knew in July 1914 that they had failed to support Serbia in the previous year as eagerly as the Serbs had hoped; and failure to support Serbia again, the Russians thought, would mean the end of Russian prestige in the Balkans. With the alignment of two rival alliance systems, the winning of an additional state to their side was of great importance for the governments. To conclude, it cannot be said that the alliance systems themselves magnified the war by involving the nations since no nation had to declare war merely because of the treaties. However, they indeed encouraged war by offering military support and co-operation, and provided the framework for the creation of rigid mobilization plans, as they conditioned expectations about the form a war would take if it broke out, and about who were likely to be friends and who enemies. Lastly, the Great Powers were more or less forced into the war with their respective allies in order to maintain their diplomatic relations and prestige. By these reasons, the alliance systems in Europe constituted a major indirect cause of the First World War. ...read more.