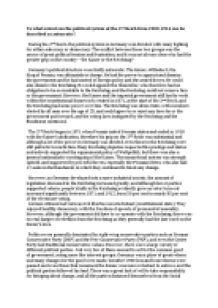 To what extent can the political system of the 2nd Reich from 1900-1914 can be described as autocratic?

﻿To what extent can the political system of the 2nd Reich from 1900-1914 can be described as autocratic? During the 2nd Reich, the political system in Germany was divided, with many fighting for either autocracy or democracy. The conflict between these two groups was the source of great political tension and frustration, and it was not always clear who had the greater grip on the country ? the Kaiser or the Reichstag? Germany?s political structure was chiefly autocratic. The Kaiser, Wilhelm II, the King of Prussia, was ultimately in charge. He had the power to appoint and dismiss the government and he had control of foreign policy and the armed forces. ...read more.

Many Reichstag deputies respected his prestige and status and actively supported the expansionist policy of Weltpolitik, but there was also a general nationalistic worshipping of the Kaiser. The monarchical system was strongly upheld, and supported by powerful forces, especially the Prussian elites, who also had 17 seats in the Bundesrat, in which they continued to block any change. However, as Germany developed into a more industrial society, the amount of legislation discussed in the Reichstag increased greatly, and although fewer parties supported reform, people?s faith in the Reichstag evidently grew as voter turn-out increased significantly between 1871 and 1912, from 50 per cent to nearly 85 per cent of the electorate voting. ...read more.

There was a great lack of will to take responsibility for bringing about change, and all the parties distanced themselves from the Social Democrats. The Conservatives vehemently disagreed with their ideals, but even the more moderate middle-class parties, such as the Progressive Liberals, were scared of their expanding influence, and they refused to co-operate actively, with the fear that constitutional reform might lead to radical reform. To conclude, I think that the political system of the 2nd Reich, from 1900-1914, was mainly autocratic, as the Kaiser had seized control of most of the power in Germany, and although much of his government?s actions were ultimately determined by the Reichstag, he could pull the strings to get what he wanted. ...read more.