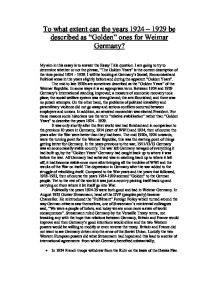 To what extent can the years 1924 - 1929 be described as "Golden" ones for Weimar Germany? My aim in this essay is to answer the Essay Title question. I am going to try to determine whether or not the phrase, "The Golden Years" is the correct description of the time period 1924 - 1929. I will be looking at Germany's Social, Economical and Political areas in the years slightly before and during the apparent "Golden Years". The mid to late 1920s are sometimes described as the "Golden Years" of the Weimar Republic. In some ways it is an appropriate term. Between 1924 and 1929 Germany's international standing improved; a measure of economic recovery took place; the social welfare system was strengthened; the arts flourished; and there was no putsch attempts. On the other hand, the problems of political instability and paramilitary violence did not go away and serious conflicts occurred between employers and unions. In addition, an avowed monarchist was elected President. For these reasons some historians use the term "relative stabilisation" rather than "Golden Years" to describe the years 1924 - 1929. It was only shortly after the first world war had finished and in comparison to the previous 10 years in Germany, 1914 (start of WW1) and 1924, then of course the years after the War were better than they had been. The mid 1920s, 1924 onwards, were the turning point for the Weimar Republic, this was the starting point of things getting better for Germany. ...read more.

In the mid to late 1920's Germany had a stable currency, competitive interest rates and an increasingly settled place within the international community. Due to this many foreign country's saw it as a good place to invest in. Between 1924 - 1930 almost 5 billion dollars was invested in Germany from abroad, much of it from the United States. The German economy grew and in 1928 industrial production exceeded pre-war levels, export performance was also strong: in 1929 exports were 40% higher than they had been in 1925. Economic Plans such as the Young and the Dawes Plan were introduced so that Germany would be able to build up their financial reserves and be able to pay back the Reparations. The Dawes plan helped by loaning Germany around $200 million to try and bring about a financial reverse. The Young Plan changed the way the reparations were paid as although Germany's economy was flourishing it couldn't continue to pay out such large sums of money, it reduced the total payment in reparations from 132 billion marks to 37 billion marks. An unemployment act was introduced in which a scheme of unemployment insurance, financed by employers, workers and the state, which complemented the generous pensions and sickness insurance scheme introduced in the 1880's. Although to many Germany now looked economically stable, it was far from it. Germany was heavily dependant on foreign investment, much of which took the form of loans and credits which could be withdrawn at short notice. ...read more.

America could no longer offer to loan money to Germany. The governments that were in power in the "Golden Years" were also greatly at fault. The Governments were spending huge amounts of money and not receiving enough money back from taxes from the public in order to cover themselves. They were running Germany into even more debt. In my opinion I do not think that the years, 1924 - 1929 were at all "Golden" in Weimar Germany. Compared to the previous 10 years they were incredibly greater, yet in the previous 10 years World War 1 had occurred, the country had gone into depression and was only just starting to pick itself up. The Social side of it all, was indeed "Golden" but that did not help Germany through Economical or Political trouble spots. There were more talented artists/writers/architects/directors etc, around than there ever had been in Germany, but whilst the Germany people were paying attention to the arts, they perhaps should have been paying more attention to what was going on politically and economically in the country. The so called "Golden Years" was only in fact the years when Germany had caught back up to just before the war, Compared to what other countries were/had achivied then no, I defiantly do not believe that the years 1924 - 1929 in Weimar Germany can be classed as being "Golden" ones. I believe that 1924 - 1929 in Weimar Germany can only be called "Golden Years" when compared to the years in which came before them and slightly after them. Only then, on that type of scale, can they really be called "Golden Years". ...read more.