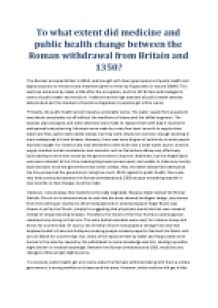 To what extent did medicine and public health change between the Roman withdrawal from Britain and 1350?

﻿To what extent did medicine and public health change between the Roman withdrawal from Britain and 1350? The Romans occupied Britain in AD43, and brought with them good systems of public health and logical solutions to medicine and treatment given to them by Hippocrates in around 300AD. This was then enhanced by Galen a little after the occupation, and this left Britain well managed in terms of public health and medicine. I believe that the high standard of public health severely deteriorated and the standard of medicine stagnated or possible got a little worse. Primarily, the public health system became undeniably worse. The water supply from aqueducts was almost completely cut off without the workforce of slaves and the skilled engineers. ...read more.

Some attempts were even made by the government to improve cleanliness, but the Anglo-Saxon wars were rampant at this time meaning kings were preoccupied, and unable to make any country wide decisions since the government was never unitary. Also, the latent laissez-faire attitude at the time prevented the government caring too much. With regards to public health, there was very little continuity between the Roman withdrawal and 1350 because everything was left in near anarchy so few changes could be made. However, I would argue that medicine only really stagnated. Because Galen backed the Roman Catholic Church in his theories when he said that the body showed intelligent design, any dissent from the techniques resulted in either being ignored or actively stopped. ...read more.

Of course, the Christian Church now played a stronger role and had displaced belief in Salus and Asclepius meaning people instead prayed to God and the Saints such as to St Blaise for a sore throat. But, many of the books written by Galen and Hippocrates were burned in the anarchy caused by the withdrawal so some knowledge was lost, causing a possible slight decline in medical knowledge. Between the Roman withdrawal and 1350, medicine only changed a little and got slightly worse. To conclude, public health got a lot worse when the Romans withdrew taking with them a unitary government, a strong workforce of slaves and the army. However, while medicine did get a little worse with the loss of books it mostly remained the same with similar beliefs about cause and treatment of disease. (23 minutes) ...read more.