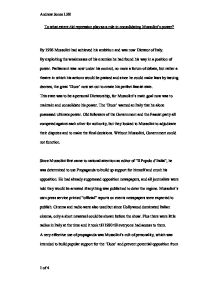 To what extent did repression play as a role in consolidating Mussolini’s power?

By 1926 Mussolini had achieved his ambition and was now Dictator of Italy.

By exploiting the weaknesses of his enemies he had found his way in a position of power. Parliament was now under his control, no more a forum of debate, but rather a theatre in which his actions would be praised and since he could make laws by issuing decrees, the great ‘Duce’ now set out to create his perfect fascist state.

This state was to be a personal Dictatorship, for Mussolini’s main goal now was to maintain and consolidate his power. The ‘Duce’ wanted an Italy that he alone possessed ultimate power. Old followers of the Government and the Fascist party all competed against each other for authority, but they looked to Mussolini to adjudicate their disputes and to make the final decisions. Without Mussolini, Government could not function.

Since Mussolini first came to national attention as editor of “Il Popolo d’Italia”, he was determined to use Propaganda to build up support for himself and crush his opposition. He had already suppressed opposition newspapers, and all journalists were told they would be arrested if anything was published to deter the regime. Mussolini’s own press service printed “official” reports on events newspapers were expected to publish. Cinema and radio were also used but since Hollywood dominated Italian cinema, only a short newsreel could be shown before the show. Plus there were little radios in Italy at the time and it took till 1930 till everyone had access to them.

A very effective use of propaganda was Mussolini’s cult of personality, which was intended to build popular support for the ‘Duce’ and prevent potential opposition from raising by stressing his superhuman talents. As A.J.P Tailor said “there was not a sport he did not excel at”.

Mussolini’s use of repression and propaganda was very effective and is now often said to be ‘the only thing he did well’, however there is several other factors that must be noted in Mussolini’s consolidation of power.

Since Mussolini was determined to ensure he had all power. He devised several policies’ which would make the King, cabinet, parliament and the civil service his loyal servants.

King Victor Emmanuel was nothing but a nuisance to Mussolini. The monarch’s had traditionally distanced itself from policies and was only concerned with foreign affairs. Since the King could dismiss Mussolini at anytime, the ‘Duce’ needed a way to prevent this. Since the March on Rome and the ‘Matteotti affair’ had proved the King’s inability to stand up to Mussolini. By 1928 Mussolini passed a law which made the King lose the right to select the Prime Minister, in stead he would only be allowed to choose a candidate on a list drawn up by the Grand Council, a body controlled by Mussolini. The Dictator however still followed protocol by visiting the King, but he was never asked for advice and only told what he wanted to hear. Since Mussolini had no real opposition, this factor is extremely important in the ‘Duce’s’ consolidation of power.

The role of the Government and Parliament was another important factor. Mussolini was not prepared to share power with ministers; his ministers were instructed to follow his instructions unquestioningly. He had even less regard for parliament. In 1926 it has lost its ability to discuss policy, to debate, amend proposed legislation and criticise Government, sinking its reputation further and further as the years passed. With no opposition the chamber was dominated by Fascists, who did little more then shout their assent, and the electorate was reduced to exclude most of the working class and results for general elections were rigged with over 98 percent majority votes. Eventually in 1939, parliament was abolished and replaced by a equally meaningless chamber of Fasces and Corporations. Since Mussolini now had complete control over how the country was run. There was no such thing as opposition or free elections.

Mussolini also wanted the other institutions of Italian state to be his servants. The civil service, local Government, the judiciary and the armed forces were his targets.

But this time the ‘Duce’ wished to avoid a head-on-clash that the radicals desired, instead Mussolini recognised that the conservatives were largely sympathetic towards him and set out to capitalise on this idea by using his powers of patronage to reward loyal behaviour and introducing policies conservatives could support. However he made it clear that if his wishes were not supported and obeyed, he would be ruthless in seeking and destroying opposition. This approach meant there was no revolution in Government which angered radicals as the party membership was dangerously low in the institutions of state, for example in 1927 it was estimated that only 15% of the civil service was Fascist. Nevertheless, the service carried out Mussolini’s wish’s without question. A similar policy was used with the armed forces. The ‘Duce’ overly emphasised that he and the military shared a common ground in expanding and having an aggressive foreign policy. Ambitious Soldiers began to realise that a party membership and a pro-fascist attitude would hugely increase their chances of promotion. A different tactic was used on the judiciary. Dozens of judges were sacked for not being sympathetic enough to Fascist supporters or being to independent. In term the justice system became very flawed and prison without trial became a common occurrence. Finally local self-government was abolished and elected mayors and councils were replaced by officials from Rome. These methods ensured Mussolini extended his power throughout the state without having unnecessary conflict, securing the conservative support.

In the light of the evidence it is apparent that the most important factor would be the King. As the only person who could put Mussolini out of power, he was a huge threat to the ‘Duce’ and couldn’t be dealt with as easy as Matteotti was. After preventing the King from exercising his power, no one would be able to stop him however, if Mussolini hadn’t been so successful with his skills of repression, the public would most likely have an uprising making all his efforts insignificant, this in turn makes it the most important factor in consolidating his power. If the great dictator was as successful with these skills during the war then his early period, his downfall would have been much more avoidable.

References: Italy: The Rise of Fascism by Mark Robson