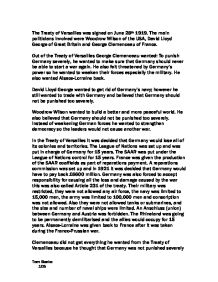 The Treaty of Versailles was signed on June 28th 1919. The main politicians involved were Woodrow Wilson of the USA, David Lloyd George of Great Britain and George Clemenceau of France. Out of the Treaty of Versailles George Clemenceau wanted: To punish Germany severely, he wanted to make sure that Germany should never be able to start a war again. He also felt threatened by Germany's power so he wanted to weaken their forces especially the military. He also wanted Alsace-Lorraine back. David Lloyd George wanted to get rid of Germany's navy; however he still wanted to trade with Germany and believed that Germany should not be punished too severely. Woodrow Wilson wanted to build a better and more peaceful world. He also believed that Germany should not be punished too severely. Instead of weakening German forces he wanted to strengthen democracy so the leaders would not cause another war. ...read more.

The Rhineland was going to be permanently demilitarised and the allies would occupy for 15 years. Alsace-Lorraine was given back to France after it was taken during the Franco-Prussian war. Clemenceau did not get everything he wanted from the Treaty of Versailles because he thought that Germany was not punished severely enough, he also thought that article 231 was not harsh enough on Germany. Another thing he wanted was Germany to be spilt up into smaller countries but this would have been going against Woodrow Wilson's self determination. He got his way, as he wanted Germany's military to be reduced so that there was no way they could ever invade France again. David Lloyd George got the German navy disbanded but he wanted it for a different reason than France, he wanted Britain to remain the strongest navy in the world. In some ways he didn't really get what he wanted as Germany were still punished pretty severely. ...read more.

In conclusion it would be fair to say that none of the "big" three achieved all of their aims at Versailles. George Clemenceau wasn't satisfied that France only got control of the SAAR coalfields for 15 years, and he was angry that the Rhineland was only demilitarised. He also thought that the reparations payment was not high enough; George Clemenceau wanted Germany to be economically crippled, all in all he wanted the treaty to be harsher on Germany. David Lloyd George got what he wanted because Germany's navy was disbanded. He also did not like the League of Nations; also he did not like self determination, thinking that it would only cause problems in the future. The only main thing that Woodrow Wilson got out of the Treaty of Versailles was the inclusion of the League of Nations. All in all the Treaty was really a compromise for all parties. You can easily see that the "big" three got something out of the treaty, some receiving land and some receiving money for the damages done to them during the war. ?? ?? ?? ?? Tom Banks 10S ...read more.