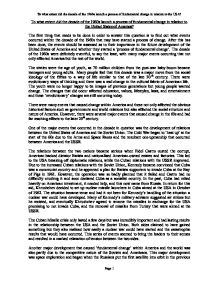 To what extent did the decade of the 1960s launch a process of fundamental change in relation to the United States of America?

To what extent did the decade of the 1960s launch a process of fundamental change in relation to the United States of America? The first thing that needs to be done in order to answer this question is to find out what events occurred within the decade of the 1960s that may have started a process of change. After this has been done, the events should be assessed as to their importance in the future development of the United States of America and whether they started a 'process of fundamental change'. The decade of the 1960s were definitely eventful, to say the least, with many major events occurring that not only effected America but the rest of the world. The sixties were the age of youth, as 70 million children from the post-war baby boom became teenagers and young adults. Many people feel that this decade was a major move from the social ideology of the fifties to a way of life similar to that of the late 20th century. There were evolutionary ways of thinking and there was a real change in the cultural fabric of American life. The youth were no longer happy to be images of previous generations but young people wanted change. ...read more.

I believe that these to space events were major and they resulted not only in a fundamental change in the understanding of space but also helped to realise that almost anything was possible with the use of technology. The desire and will to put a man on the moon resulted in many other technological advances later in the 20th century because there was the sense of mind that 'anything is possible'. One of the other major occurrences that helped shape America and was a major factor in the change of the social and moral structure was the civil rights movement. This movement achieved many gains during the 1960s and these gains would help to advance the rights of blacks for the remainder of the 20th century. The fifties had ensured some gains for the welfare of blacks such as the desegregation of schools in the Brown v The Board of Education Topeka Kansas in 1954 but much was still to be done and some of this was achieved in the 1960s. Two major advancements in the civil rights movement in the early sixties were the creation of Student Non-violent Coordinating Committee (SNCC) and the creation of the Congress of Racial Equality (CORE). ...read more.

Unisex clothing also came to the fore with bell-bottomed jeans and embellished t-shirts being worn by both male and females. The theatres and cinemas were also part of the change with many new shows or movies breaking the previous taboos so much that a new code had to be written. There was also a major change in popular music in the mid-1960s, caused in part by the drug scene that was prominent within America. Acid Rock, highly amplified and improvisational, and the more mellow psychedelic rock gained prominence. These changes in fashion and the arts were vitally important to the world as we know it today because had it not been for the youth of the fifties then many of these changes may not have taken place and the youth of today may be stuck with the oppressive nature of the arts and fashion in the fifties. In conclusion, I feel that the decade of the sixties did launch a process of fundamental change and was vitally important in American history. Many of the advancements made in this decade launched the changes and processes that helped to shape and mould the country into the United States of America, as we know it today. To what extent did the decade of the 1960s launch a process of fundamental change in relation to the USA? Page 1 ...read more.