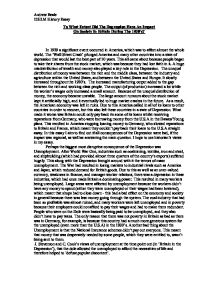 To What Extent Did The Depression Have An Impact On Society In Britain During The 1930's?

To What Extent Did The Depression Have An Impact On Society In Britain During The 1930's? In 1929 a significant event occurred in America, which was to affect almost the whole world. The 'Wall Street Crash' plunged America and many other countries into a state of depression that would last the best part of 10 years. This all came about because people began to take their shares from the stock market, which was because they had lost faith in it. A huge misdistribution of wealth and money also played a key role in the Depression. The unequal distribution of money was between the rich and the middle class, between the industry and agriculture within the United States, and between the United States and Europe. It slowly increased throughout the 1920's. The increased manufacturing output added to the gap between the rich and working class people. The output (of production) increased a lot while the worker's wages only increased a small amount. Because of the unequal distribution of money, the economy became unstable. The large amount rumours about the stock market kept it artificially high, and it eventually led to huge market crashes in the future. As a result, the American economy was left in ruins. Due to this America called in all of its loans to other countries in order to recover, but this also left these countries in a state of Depression. ...read more.

Even though there were new industrial area in Britain that were set up around big cities like Birmingham and London, people living there were still not immune to unemployment. There were so many people trying to get jobs at these new places of work, and yet those who already had jobs there could not be guaranteed they would still have them by the next week. There were some good things that came out of the Great Depression of the 1930's, even after all of the problems for nearly ten years. British society had changed during this time and depending in what area of the nation you lived in, it either was a change for the better, or a change for the worse (even though everything did eventually recover). The cost of living in Britain fell by more than a third between 1920 and 1938. This is a huge change in what it would cost for the average person to maintain a satisfactory standard of living. This benefited all social classes, but the one most affected was the working class. By being able to afford to live a suitable life for a third cheaper than it used to be, meant that the Working class were able to live more comfortably with large sections of them gaining a general rise in living standards, and were able to spend more of their earnings (if they had a job). ...read more.

Stevenson and C. Cook write, 'for three quarters of the population (and, for most of the decade, more) who stayed in work, these were years of rising living standards in prosperous new suburbs, and of new levels of consumption upon which a considerable degree of industrial growth was based.' Personally I feel A.J.P Taylor puts it better when he wrote, 'which was more significant for the future - over a million unemployed or over a million private cars?' The Depression of the 1930's, in my view, had a very big impact on society in Britain. It had both its good and bad points, but that all really depended on which area of the country that you lived in. The people living in the Midlands or especially the south of the country were hardly affected at all, and if anything their living standards went up. But for people living in the North, in Scotland or South Wales, life couldn't have been worse for them. It seems that whatever social class you were at the time, if you were in an area that was badly affected you would probably suffer. But it is true that in the worse-off areas, the different social classes didn't really suffer as equally as they perhaps should have. This is because they had savings and could use these to support themselves comfortably. The business owners were probably the worse hit in industry, because so many businesses went bankrupt during the depression. There was nothing that they could really do about it because whatever they did it was always going to happen. Andrew Beale 12HLM History Essay ...read more.