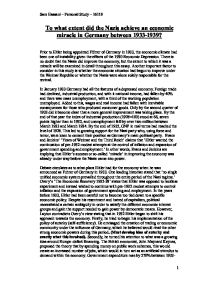 To what extent did the Nazis achieve an economic miracle in Germany between 1933-1939?

To what extent did the Nazis achieve an economic miracle in Germany between 1933-1939? Prior to Hitler being appointed F�hrer of Germany in 1933, the economic climate had been one of instability given the effects of the 1930 Economic Depression. There is no doubt that the Nazis did improve the economy, but the extent to which it was a miracle will be examined in detail throughout this essay. Another important factor to consider in this study is whether the economic situation had begun to improve under the Weimar Republic or whether the Nazis were alone solely responsible for the revival. In January 1933 Germany had all the features of a depressed economy. Foreign trade had declined, industrial production, and with it national income, had fallen by 40% and there was mass unemployment, with a third of the working population unemployed. Added to this, wages and real income had fallen with inevitable consequences for those who produced consumer goods. Only by the second quarter of 1933 did it become clear that a more general improvement was taking place. By the end of that year the index of industrial production (1928=100) stood at 66, seven points higher than in 1932, and unemployment fell by over two million between March 1933 and March 1934. By the end of 1935, GNP in real terms had reached the level of 1928. This led to growing support for the Nazi party who, using force and terror, were keen to cement their position as Germany's main political party. Evans and Jenkins' 'Years of Weimar and the Third Reich' claims that 'Hitler wanted the continuation of pre-1932 modest attempts at the control of inflation and expansion of government spending and employment.' In other words, Evans and Jenkins are implying that Hitler's success or so-called 'miracle' in improving the economy was already under way before the Nazis came into power. Debate circulates as to what plans Hitler had for the economy when he was announced as Fuhrer of Germany in 1933. ...read more.

Its resources had dwindled and as a result, it lost its capacity to wage a total war. He refused to see the rearmament programme jeopardised and so he overruled Schacht and launched the Four Year Plan. Planning and Procedure Since beginning to study Germany and the introduction of the Nazi party in German history at GCSE level, I have been particularly intrigued by how Hitler was able to resurrect the economy in such a short period of time i.e from the 1929 Depression to the start of the Second World War, whilst hypnotising the minds of millions of Germans through methods such as propaganda and terror amongst a few. Having briefly skimmed over the topic when deciding on my exact title, I found that there was a lot of scope to this essay. The performance of the German economy between the Great Depression and the Second World War had been the subject of intense amademic debate for several decades, with no definitive conclusion. Therefore, this challenge was one that I was prepared to delve into and come up with my own, hopefully analytically-based, judgement as to whether the Nazis did achieve an economic miracle in Germany between 1932-39. Throughout this essay, I encountered several problems, some that I found extremely difficult to overcome. When doing my research on the Internet I found it very tricky to find specifically the detail I was looking for to analyse. When I actually found two websites, they were both in German. Some of the text was in English, which did provide me with some helpful material, but having never studied German the rest was ineligible to me. Another problem that I came across was the complexity of some of the economic terms that were present in a few of my reading references. Having not taken Economics at an advanced level, I found it difficult integrating my reading with what I wanted to put down on paper. ...read more.

* Youth unemployment was dealt with by the forming of the Voluntary Labour Service (VLS) and the Voluntary Youth Service (VYS), these planted forests, repaired river banks and helped reclaim wasteland. * Women in certain professions such as doctors and civil servants were dismissed, while other married women were paid a lump sum of 1000 marks to stay at home. * In the summer of 1935 Adolf Hitler announced the introduction of Labour Service (RAD). Under this measure all men aged between the ages of nineteen and twenty-five had work for the government for six months. Later women were also included in the scheme and they did work such as teaching and domestic service. Did the Nazis produce an economic miracle for Germany? How successful were the Nazis in tackling unemployment, inflation and creating self-sufficiency? * Unemployment had fallen from 6 million in 1933 to 300,000 by 1939 * Industrial production in 1939 was above the figure for Weimar Germany before the 1929 Wall Street Crash. BUT * By 1939, Germany still imported 33% of its required raw materials * Government income had been 10 billion Reichmarks in 1928. In 1939, it was 15 billion. However, government spending had increased from 12 billion Reich marks in 1928 to over 30 billion in 1939. * From 1933 to 1939, the Nazi government always spent more than it earned so that by 1939, government debt stood at over 40 billion Reichsmarks. * Annual food consumption in 1937 had fallen for wheat bread, meat, bacon, milk, eggs, fish vegetables, sugar, tropical fruit and beer compared to the 1927 figures. The only increase was in rye bread, cheese and potatoes. * Real earnings in 1938 were all but the same as the 1928 figure. (Real earnings are wages adjusted to allow for inflation). The real wage value increased over the 8-year period to 200% of its 1929 value. The value stood at http://www.wiwi.hu-berlin.de/wg/ritschl/pdf_files/ritschl_dec2000.pdf http://www.nuff.ox.ac.uk/economics/history/Paper56/56dimsdale.pdf ?? ?? ?? ?? Sam Hassani - Personal Study - 16118 1 ...read more.