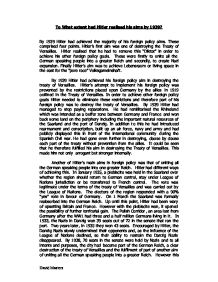 To what extent had Hitler realised his aims by 1939?

The Polish Corridor, an area lost from Germany after the WW1 had three and a half million Germans living in it. In 1933, the Nazis in Danzig won 39 seats out of 72 in the senate that ran the port. Two years later, in 1935 they won 43 seats. Encouraged by Hitler, the Danzig Nazis slowly undermined their opponents and, as the influence of the League of Nations declined, so their ability to restrain the Danzig Nazis disappeared. By 1938, 70 seats in the senate were held by Nazis and to all intents and purposes, the city had become part of the German Reich, a clear destruction of the treaty of Versailles and the fulfilment of part of another aim of uniting all the German speaking people into a greater Reich. However this was just the beginning of Hitler's pursuit in what AJP Taylor refers to as "fantasies behind bars". Hitler wanted to go further in uniting the German people and so intended to create Anshluss, the union of Germany and Austria, something which had never historically occurred as Austria had always been an independent state. ...read more.

Hitler's last foreign policy aim was that of Nazi expansion. This was the notion of spreading Nazism throughout Europe. A clear example of this can be seen in the creation of a puppet state in Slovakia by 1939. This idea tied in closely with that of Lebensraum and uniting all the German speaking people into a greater Reich. It would appear that Hitler did go some way towards achieving this, however Nazi expansion did not fully occur until after this date and once again did not spread as far east as the Soviet Union before 1939. It could be seen that Hitler achieved three out of his four main goals in Nazi foreign policy. Although he had managed by 1939 to unite all the German speaking people into a greater Reich and had destroyed the treaty of Versailles, Hitler had not managed to fully create Lebensraum and Nazi expansion had only just begun to occur. This would illustrate that by 1939 Hitler had made good progress in his attempt to fulfil the plans laid out in his foreign policy. David Masters ...read more.