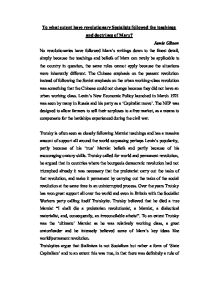 To what extent have revolutionary Socialists followed the teachings and doctrines of Marx?

To what extent have revolutionary Socialists followed the teachings and doctrines of Marx? Jamie Gibson No revolutionaries have followed Marx's writings down to the finest detail, simply because the teachings and beliefs of Marx can rarely be applicable to the country in question, the same rules cannot apply because the situations were inherently different. The Chinese emphasis on the peasant revolution instead of following the Soviet emphasis on the urban working-class revolution was something that the Chinese could not change because they did not have an urban working class. Lenin's New Economic Policy launched in March 1921 was seen by many in Russia and his party as a 'Capitalist move'. The NEP was designed to allow farmers to sell their surpluses to a free market, as a means to compensate for the hardships experienced during the civil war. Trotsky is often seen as closely following Marxist teachings and has a massive amount of support all around the world surpassing perhaps Lenin's popularity, partly because of his 'true' Marxist beliefs and partly because of his encouraging oratory skills. ...read more.

Lenin deviated quite often from original Marxist teachings and beliefs but Lenin would have said that this was necessary to accomplish a Communist society. Lenin believed that socialism could be established in a country, which had not passed through the full development of industrial capitalism while Marx viewed the socialist revolution as arising out of the industrial proletariat. Lenin's NEP was a direct digression from Marxism which won him great criticism from other revolutionaries, one person describing the move as the "New Exploitation of the Proletariat". The Soviet's government's policy of War Communism during the Civil War created social distress and led to riots, strikes and demonstrations. The Kronstadt Uprising reinforced the idea that the government was unpopular and accepted that they had made a mistake "of deciding upon an immediate transition to communist production and distribution." Lenin combated this by trying to reason with the peasants: "only by coming to an agreement with the peasants can we save the socialist revolution". Siding with the hated fascist enemy in the 1939 Nazi-Soviet Pact was a prime example of Stalin's many diversions from political ideology in favour of pragmatic solutions. ...read more.

Chairman Mao was different to all the other socialist revolutionaries because he had many different conflicts to deal with and the situation was unique in that there was no urban-working class, only a peasant class. Mao was in constant battle with the Chinese nationalist forces led by Chiang Kai-Shek however, initially the nationalists and communists were united under the name of the Kuomintang, which is against Marxist ideology. Marx believed that under a communist society there would be no country or nationality boundaries and therefore nationalism would be almost useless. Chairman Mao encouraged the overthrow of local landlords and landowners in order to advance towards a communist society but he was often criticised for advancing too fast and for skipping out various necessary stages of communism according to Marx. In conclusion, no socialist revolutionary faithfully followed the communist manifesto and Marx's ideology because it is almost impossible to implement an ideology written half a century ago under totally different conditions and a totally different situation. Every revolutionary had a their own adaptation of Marxism, this is evident with all the varying 'isms' developed out of Marxism like Trotskyism, Leninism, Stalinism and Maoism. ...read more.