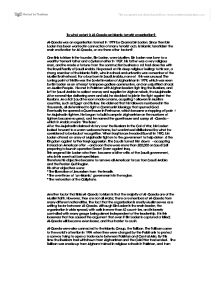 To what extent is Al Queda a terrorist organisation?

To what extent is Al-Qaeda an Islamic terrorist organisation? Al-Qaeda was an organisation formed in 1979 by Osama bin Laden. Since then bin Laden has been wanted in connection of many terrorist acts. Is Islamic fanaticism the main motivation for Al-Qaeda, or are there other factors? One link to Islam is the founder, Bin Laden, were Muslims. Bin Laden was born to a wealthy Yemeni father and a Syrian mother in 1957. His father was a very religious man, and he made a fortune from the construction business and had close ties with the Royal Family of Saudi Arabia. He passed on his deep religious feelings to his son, a strong member of the Islamic Faith, who in school and university was a member of the Muslim Brotherhood. For a boy born in Saudi Arabia, none of this was unusual. The turning point of his life was the Soviet Invasion of Afghanistan in 1979, which was seen by Bin Laden as an attempt to impose godless communism, and an unjustified attack on Muslim People. He met in Pakistan with Afghan leaders fighting the Russians, and left for Saudi Arabia to collect money and supplies for Afghan rebels, the Mujahadin. ...read more.

Afghanistan was suffering from the internal strife of various different factions fighting each other and bringing misery to the people. The fact that the Taliban were successful in opposing all these groups made them very popular, especially once they began to stamp out corruption and restore peace. The policy of the Taliban was to set up the world's purest Islamic state and they took their ideas as much as possible from a rigid interpretation of Islamic Law. This meant that, for instance, crime was punished directly by means of execution and amputation. Men were far superior to women, who were not able to go to school or work, and were forced to cover their bodies entirely. Unfortunately the government soon came to the attention of the international community, mostly for its lack of equality for women. However, when the United Nations did impose sanctions in 1998 this was because the Taliban refused to hand over one Osama bin Laden. The Taliban claimed that bin Laden was a guest in their country, and Islamic tradition insisted he therefore be treated with hospitality. The Taliban protected Al-Qaeda, and Osama bin Laden, and provided them with a safe base. ...read more.

Iran, for example, was told by Western powers who was to be their leader. The Muslims feel that the oil is theirs, and the presence of Americans and western powers in Arab countries could be yet another attempt to steal their oil. Much of the hostility towards Westerners' stems from this problem. The motivation for the terrorists' acts may be to try and stop Americans trying to take what is not theirs. Poverty and disillusionment is another factor that can suggest that Al-Qaeda is not an Islamic Organization. Extreme poverty is suffered in many areas of the Islamic Word, such as Bangladesh, or Sudan. Many Muslims blame this on the economic exploitation of western businesses and companies for this poverty. They seek to alter this state of affairs by striking back at the richer nations and affecting their business profits, as they believe that this is the only way to make world trade fairer. Recruits are gained easily from those who feel that they have nothing to lose, and that any action they take can only lead to improvement in their lives. Al-Qaeda could just be fighting against the extreme poverty found in the Islamic World, as they feel that the Western World have been exploiting them. There have been many terrorist acts upon Israel, which began in 1947. ...read more.