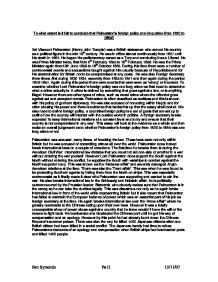 To what extent is it fair to conclude that Palmerston(TM)s foreign policy one long crime from 1830 to 1865?

To what extent is it fair to conclude that Palmerston's foreign policy one long crime from 1830 to 1865? 3rd Viscount Palmerston (Henry John Temple) was a British statesman who served his country as a political figure in the mid 19th century. He was in office almost continuously from 1807 until his death in 1865. He began his parliamentary career as a Tory and concluding it as a Liberal. He was Prime Minister twice, first from 6th February 1855 to 19th February 1858. He was the Prime Minister again from12th June 1859 to 18th October 1865. During this time there were a number of controversial events and accusations bought against him usually because of his policies and for his determination for Britain not to be compromised at any costs. He was also Foreign Secretary three times, first during 1830-1834, secondly from 1835 to 1841 and then again during the period 1846-1851. Again during this period there were events that were seen as 'wrong' or incorrect. To examine whether Lord Palmerston's foreign policy was one long crime we first need to determine what a crime actually is. A crime is defined by something that goes against a law, or is anything illegal. However there are other types of crime, such as moral crime where the offender goes against set and accepted morals. Palmerston is often described as reckless and this is shown with his policy of gunboat diplomacy. He was also accused of not acting within his job and for often abusing his power and there is evidence that backs this up that the essay shall look at. ...read more.

Palmerston knew the Chinese were not strong enough to stop the British using force to get their way so he did use force. This force was called 'gunboat diplomacy'. This was used on a whim over the years by Palmerston and quickly became his crowning political move He was also immoral when he provided boats for the Italian revolutionist Garibaldi to get to the mainland. This was immoral as Palmerston was supposed to support the monarchies of Europe to consolidate Britain's own monarchy. Garibaldi himself was against the idea of a monarchy and wanted to overthrow the Italian monarchy, He was immoral again over Poland by not following through his promises. He said to Poland that he would support them in their revolt, however when the Polish did revolt Palmerston did nothing which meant that the revolt was brutally put down and the Polish were massacred. The 'Haynau Affair' was a terrible chapter in Palmerston's era which ruined the Anglo-Hungarian relations by completely disowning the General Haynau, this greatly annoyed the Queen as one of her state guests had been badly treated and this reflected on her as the leader as one of the greatest countries in the world. An expectation of a foreign secretary is to fulfil his role and to do nothing that would jeopardise his or the countries positions. However there were a couple of occasions where he did act outside of his job. One of these occasions was the infamous 'Haynau Affair'. The Hungarian diplomat General Haynau was on a state visit and was a guest of the Queen. ...read more.

This means that his actions were justified as he was only doing his job. He knew he was going to break the law but this was necessary to fulfil his job and to make sure Britain was not negatively affected. In conclusion Palmerston did commit many crimes during his time in office as both Prime Minister and Foreign Secretary, however he strongly believed that to keep Britain in its place in European and World standings these crimes and risks had to be committed. His gunboat diplomacy was often against the legal law but it was often for causes that would aid Britain in the long run, therefore the good outweigh the bad in this argument and the only conclusion anyone could come to is that Palmerstons foreign policy from 1830 to 1865 was not just one big crime. His policies did have criminal elements, however his aims were always for the good of the country this can be demonstrated by the fact the throughout Palmerstons reign Britain was never really threatened in its position on top of Europe if not the World. Britain remained respected in political affairs and when Palmerston spoke he was taken seriously. This can be shown as during the short time where he was not in office Britain quickly found itself in a war which would turn wrong for it as it was up against a country with far superior man power. However when Palmerston came back peace was quickly restored and Britain did manage to prevent Russian expansion. Because of all of theses reasons I think that Palmerston's foreign policy for 1830 to 1865 was not one long crime. ?? ?? ?? ?? Ben Symonds Pa12 13/11/07 ...read more.