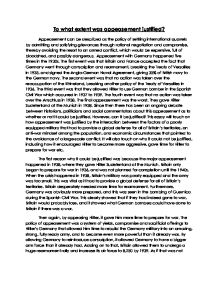 To what extent was appeasement justified?

To what extent was appeasement justified? Appeasement can be described as the policy of settling international quarrels by admitting and satisfying grievances through rational negotiation and compromise, thereby avoiding the resort to an armed conflict, which would be expensive, full of bloodshed, and possibly dangerous. Appeasement with Germany happened five times in the 1930s. The first event was that Britain and France accepted the fact that Germany went through conscription and rearmament, breaking the Treaty of Versailles in 1935, and signed the Anglo-German Naval Agreement, giving 35% of British navy to the German navy. The second event was that no action was taken over the reoccupation of the Rhineland, breaking another policy of the Treaty of Versailles in 1936. The third event was that they allowed Hitler to use German bomber in the Spanish Civil War which occurred in 1937 to 1939. The fourth event was that no action was taken over the Anschluss in 1938. The final appeasement was the worst. They gave Hitler Sudetenland at the Munich in 1938. Since then there has been an ongoing debate between historians, politicians and social commentators about this appeasement as to whether or not it could be justified. However, can it be justified? This essay will touch on how appeasement was justified by the interaction between the factors of a poorly equipped military that had to provide a global defense for all of Britain's territories, an anti-war mindset among the population, and economic circumstances that pointed to the avoidance of a large-scale conflict. ...read more.

Without any support from the British population, the United States, the Commonwealth States, and France, Britain could not be ready for a war. Even if Britain had gone to war over the Rhineland, most of the population would have opposed to war. This was because most people in Britain at that time were still sympathetic towards Germany and thought that the Treaty of Versailles was unfair and too harsh and that Germany had a right to be treated as a great power. Hence in 1935, they were comfortable with signing the Anglo-German Naval Agreement and when Hitler remilitarized the Rhineland in 1936, there was a feeling that he was just 'marching into his own backyard'. When Anschluss took place in 1938, the Austrians which were largely consisted of Germans anyway, were simply achieving the self-determination that denied them at the Treaty of Versailles. Britain could never have won the Second World War with doubt on the home front. Appeasement meant that, when Chamberlain did eventually declare war, the British people went to war knowing that they had done everything in their power to maintain peace, and that they were rearmed and ready for war. On top of that, many people, particularly the younger generation, still believed in the League of Nations and its assertion that quarrels could be ended by negotiation. ...read more.

From this it is obvious that Low is trying to make a point- that Hitler is going to claim the rest of the countries in only a matter of time, and that some action should be taken. The words on Hitler's sack saying "Germany over all" further emphasizes the Low's opinion of what Hitler's plan in taking over all the countries. Hitler also has a smug on his face, showing his satisfaction with his accomplishments, and confidence of attaining his other goals. The words on the headboard of the bed "Ex French-British Family" suggests that cartoonist's opinion that by abandoning Czechoslovakia, Britain and France had lost the trust of the countries of Eastern Europe. Thus, this cartoon is clearly an anti-Munich agreement or anti-appeasement cartoon. The purpose of the cartoon is to let the audience know that all that has been accomplished is losing trusts of the countries of Eastern Europe, losing friends, and that Hitler will go on seizing other countries if no action is taken. Low is trying to convince the audience that some sort of action to prevent Hitler from his territorial ambitions is needed. The inclusion of Hitler's statement that "Europe can look forward to a Christmas of peace" is a sarcastic comment made by Low. In actual fact, what Low is trying to put across is that Europe can look forward to a disastrous time being overtaken by Hitler. ...read more.