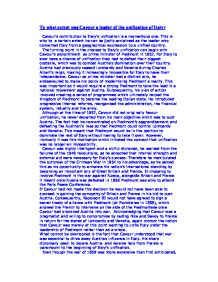 To what extent was Cavour a leader of the unification of Italy?

To what extent was Cavour a leader of the unification of Italy? Cavour's contribution to Italy's unification is a momentous one. This is why to a certain extent he can be justly acclaimed as the leader who converted Italy from a geographical expression to a unified country. The turning point in the process to Italy's unification can begin with Cavour's appointment as prime minister of Piedmont in 1852. For Italy to ever have a chance of unification they had to defeat their biggest obstacle, which was to combat Austria's domination over their country. Austria had previously ceased Lombardy and Venetia during Charles Albert's reign, making it increasingly impossible for Italy to have their independence. Cavour as prime minister had a distinct aim, he endeavoured to make his policy of modernizing Piedmont a reality. This was important as it would require a strong Piedmont to take the lead in a national movement against Austria. Subsequently, his plan of action involved creating a series of programmes which ultimately helped the Kingdom of Piedmont to become the leading Italian state. He introduced progressive internal reforms, reorganised the administration, the financial system, industry and the army. ...read more.

With the resignation of Cavour's post as prime minister in 1859 it can be argued that he was abandoning Italy's chance of unification. However it has to be remembered that unification was at the time not his intention. Cavour's stint as prime minister had generated tremendous support for the unification cause. His supporters not only demanded union with Piedmont they refused to accept the return of their old rulers as ordered by the Treaty of Villafranca. This shows that Cavour's policies were respected, Britain showed support for Piedmont's cause, thus encouraging Napoleon to show support for he did not wish Britain to have an established influence in Italy. The fact that Victor Emmanuel reinstated Cavour as prime minister in 1860 reinforces the fact that Cavour was a successful leader who undeniably was contributing towards a form of unification. Cavour, it would seem through Piedmont's development had brought about the prestige and power Italy desperately needed after the Mazzinian failures in the late 1840s. However, despite the effects of his political and diplomatic tactics, his motives were far from the true nationalistic spirit of Italy. Cavour's main priority was his ambitions for a dominant Piedmont in Northern Italy. ...read more.

minds of the public that it motivated Italian nationalists to eventually turn to the monarchical leadership offered by Cavour and Victor Emmanuel. In hindsight Cavour can be acclaimed with the title, leader of Italian unification partly because if he had not used his political diplomacy as prime minister he would not have secured foreign allegiances with Britain and more importantly France. This alliance with France was fundamental to the unification of Italy as without the help of Napoleon Piedmont would never have defeated Austria. It was this defeat that restored hope and initiated the possibility that one day Italy may be fully united. It becomes irrelevant that Cavour did not actually live to see the completion of Italy's unity as he was the one who had learned from the revolutionary mistakes and began Italy's road to independence. However the other three figures also contributed as leaders of the cause in one way and it can be said that without one of them, unification would have been far less likely. Mazzini inspired ideas of unity among the people, Victor Emmanuel appointed the right leaders, Garibaldi used his charismatic leadership and military competence to great effect by conquering the South. Therefore only to a certain extent Cavour can be considered leader of Italian unification. . ...read more.