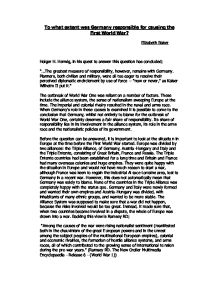 To what extent was Germany responsible for causing the First World War?

To what extent was Germany responsible for causing the First World War? Elizabeth Baker Holger H. Herwig, in his quest to answer this question has concluded; "...The greatest measure of responsibility, however, remains with Germany. Planners, both civilian and military, were all too eager to resolve their perceived diplomatic encirclement by use of force -- "now or never," as Kaiser Wilhelm II put it." The outbreak of World War One was reliant on a number of factors. These include the alliance system, the sense of nationalism sweeping Europe at the time. The imperial and colonial rivalry resulted in the naval and arms race. When Germany's role in these causes is examined it is possible to come to the conclusion that Germany, whilst not entirely to blame for the outbreak of World War One, certainly deserves a fair share of responsibility. Its share of responsibility lies in its involvement in the alliance system, its role in the arms race and the nationalistic policies of its government. Before the question can be answered, it is important to look at the situation in Europe at the time before the First World War started. Europe was divided by two alliances: the Triple Alliance, of Germany, Austria-Hungary and Italy and the Triple Entente, consisting of Great Britain, France and Russia. The Triple Entente countries had been established for a long time and Britain and France had many overseas colonies and huge empires. ...read more.

Germany and Britain were on friendly terms, their agreement on the Baghdad railway outweighing their naval rivalry. Industrialists in Germany did not want a war, which might spoil the country's economic prospects. They thought that Germany would become the leading power in Europe from economic strength alone. French and British people were more concerned about Russia than they were about Germany, and a future alliance between Britain, France and Germany against Russia did not seem out of the question. Austria-Hungary was the country with the most problems just before the war. It was unquestionably a huge country and a major European power, but it was very unstable. Many groups including nationalistic Serbs, who wanted the part of Austria-Hungary in which they lived to be part of Serbia, inhabited the country. In 1908, Austria took over Bosnia and Herzegovina. Russia and Serbia would have liked to intervene, but Germany's support for Austria discouraged them. Austria-Hungary had tried similar things before, but this was the first time she received assured support from Germany. Russia did not wish to be caught out again, and prepared her army. Later, in 1912 and 1913, there was a series of local wars in the Balkans. Serbia, newly independent and bordering Austria-Hungary, emerged as the most powerful country and was supported by Russia. Austria-Hungary was worried and was looking for an excuse to remove the threat of Serbia. ...read more.

Supporting this comment is Jeremy Black, investigating "Why Wars happen"; " In a situation of constant uncertainty and international 'anarchy', there is a multitude of causes for war, but war does not break out. Therefore it is necessary to focus on what have been termed 'triggers' or 'precipitants' The Allies were suspicious of Germany's actions before the war, when they possibly should not have been, and this increased the tension. Austria-Hungary's hostility with Russia and Serbia played a major part in causing a war to occur, although Germany agreed to support Austria-Hungary before Austria-Hungary declared war on Serbia. I think that, with the Alliance System dominating Europe, a war was inevitable, to sort out the situation. However, there cannot be a war without somebody to start it and Germany certainly played a big part in this. Though the immediate cause of the war was the murder of the ruler of Austria-Hungary, it was the long term causes, as elaborated upon throughout the course of this essay, that were the real reasons for the start of the First World War. These causes were the nationalist sentiment, colonial and economic rivalries, the formation of hostile alliance systems and the arms races. These long-term causes were the fuel, whereas the immediate causes provided only the spark that lit the huge fire. (Herwig, H. H., The Outbreak of World War I, 1991 ) (Marshall, S. L. A., World War One, 1985, page 25.) (Ramsey RD. The New Grolier Multimedia Encyclopaedia - Release 6 - (World War 1)) (Jeremy B., Why Wars happen) (Matel, 1984:72-76). ...read more.