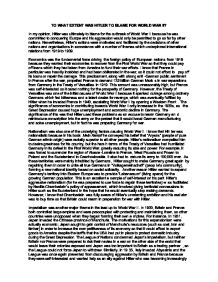 To what extent was Hitler to blame for WW2?

TO WHAT EXTENT WAS HITLER TO BLAME FOR WORLD WAR II? In my opinion, Hitler was ultimately to blame for the outbreak of World War II because he was committed to conquering Europe and his aggression would only be permitted to go so far by other nations. Nevertheless, Hitler's actions were motivated and facilitated by the decisions of other nations and organisations in accordance with a number of themes which underpinned international relations from 1919 to 1939. Economics was the fundamental force driving the foreign policy of European nations from 1919 because they wanted their economies to recover from the First World War so that they could pay off loans which they had taken from America to fund their war efforts. I know that France in particular was heavily indebted and had been obliterated in the war, so it could not afford to pay off its loans or repair the damage. This predicament, along with strong anti-German public sentiment in France after the war, propelled France to demand 132 billion German Marks in war reparations from Germany in the Treaty of Versailles in 1919. This amount was unreasonably high, but France was self-interested so it cared nothing for the prosperity of Germany. However, the Treaty of Versailles was one of the initial causes of World War II because it sparked outrage among ordinary Germans which fed bitterness ...read more.

However, I know that Chamberlain was fully aware of Hitler's unrelenting ambition and his real aim was to buy time so that Britain could rearm in preparation for war with Hitler. Imperialism was another major theme in the lead up to World War II. In 1930, Britain and France both controlled large empires and were preoccupied with protecting and maintaining them, so other countries were unopposed when they began forming their own empires. For instance, in 1931, Japan invaded the Chinese province of Manchuria. The motivations for this expansionism were actually economic; Japan sought to gain control of Manchuria's resources (such as coal, iron and timber) in order to increase the competitiveness of its economy so that it could afford to export goods to America despite the tariffs that the USA had put in place to protect domestic industry during the Great Depression. The League of Nations condemned Japan's imperialism, but neither Britain nor France were prepared to risk their navies in a war on the other side of the world that would leave their colonies exposed and Japan was too important to Britain as a trading partner, so the League could not force Japan to withdraw. Similarly, in 1935, Italy invaded Abyssinia and the League was once again prevented from discouraging aggression by Britain and France because they were self-interested and wanted Italy as an ally against Hitler who was becoming increasingly powerful. ...read more.

However, this was a biased alliance because it was much less important to Hitler than Stalin, so when it was no longer beneficial to Hitler he broke it, invading the USSR in 1941. The alliance between Britain and France is also interesting because although it was created to counter any threat posed by Germany through collective security, it was undermined by Britain's policy of appeasement. France was less sympathetic towards Germany than Britain and it did not condone Hitler's demands for more territory. However, it was unwilling to use force without the support of Britain which it lacked because of appeasement and it was also unwilling to go to war in 1936 to prevent Hitler remilitarising the Rhineland as there were upcoming elections in France. This encouraged Hitler to invade Czechoslovakia and Poland because he knew that France would not intervene. In conclusion, economics and militarism had the greatest influence on Hitler's capabilities as he would not have come to power without the desperation caused by the Great Depression, nor would he have been unable to conquer any of Europe without powerful armed forces. But in the end, Hitler was overall to blame because he had no limit to his ambition - the themes of economics and militarism were only the most important because they determined the extent to which Hitler was able to fulfil his ambition. ?? ?? ?? ?? ...read more.