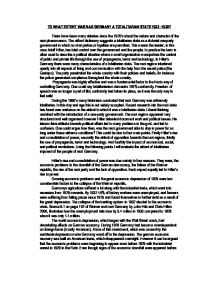 TO WHAT EXTENT WAS NAZI GERMANY A TOTALITARIAN STATE 1933-1939? There have been many debates since the 1920's about the nature and character of the nazi phenomenon. The oxford dictionary suggests a totalitarian state as a dictorial one-party government in which no rival parties or loyalties are permitted. This means the leader, in this case Adolf Hitler, has total control over the government and the people. In practice the term is often used to describe a political situation where a small organisation monopolizes the central of public and private life through the use of propaganda, terror and technology. In Hitler's Germany there were many characteristics of a totalitarian state. The nazi regime interfered openly into all aspects of living and communication with the help from the secret police (the Gestapo). The party penetrated the whole country with their policies and beliefs, for instance the police generated compliance throughout the whole country. Propaganda was highly effective and was a fundamental factor to the Nazis way of controlling Germany. One could say totalitarianism demands 100% conformity. Freedom of speech was no longer a part of life; conformity had taken its place, as it was the only way to feel safe! During the 1950's many historians concluded that nazi Germany was extremely totalitarian. In this day and age this is not widely accepted. Recent research into the nazi state has found new evidence on the extent to which it was a totalitarian state. Liberal thinking vanished with the introduction of a one-party government. The nazi regime appeared very structured and well organised however Hitler detested document work and political issues. His laisezz-faire attitude towards political affairs led to many problems in the govt. ...read more.

By 1934 Hitler had banned opposing activity and managed to make it illegal to remove him. There is great deal of information suggesting that opposition was limited but also suggestive of how popular Hitler really was. Overall there has been a recent shift in the interpretation about the extent to which the population voluntarily supported the regime. More weight has been reflected on the level of compliance imposed at all levels. There was opposition but its effectiveness was too weak to overthrow Hitler and his nazi regime. However Kershaw has argued that, "The acute perception of social injustice, the class conscious awareness of inequalities changed less in the third Reich than is often supposed". It is therefore impossible to measure the extent of opposition and true support because of the fact that the Gestapo was so cruel in the destruction of most opposition. All in all Hitler's opposition was that of a minority. Many historians at the time assumed all Germans supported Hitler when that was not the case. The only true and vital support Hitler had was the army. During Hitler's time in power he implemented many policies known as the nazi economic policies. His earlier policies showed to be successful. Unemployment was on the downturn (1932 5.6 million unemployed compared to 1933 4.8 mill unemployed), and he was able to claim for the recovery of the depression of 1929. However it can be argued that the recovery of Germany was aided by a worldwide recovery after the Wall Street crash of 1929. The implementation of the four-year plan in 1936 was not as successful as his earlier policies. ...read more.

Again this was a hard challenge as the churches had a strong link with the people of Germany, which was hard to break. There was evidently a big difference between the nazi state and the churches, which are illustrated in source 16.15 in the Weimar and nazi textbook, page 312. A quote from a police report in Cologne, March 1934 illustrates how far the Nazis went to reduce the hold of religion; "Politically, it is noteworthy and illuminating that the catholic population of Cologne...in recent times have banded together strongly. They are taking part in church celebrations and events in numbers of such a size that have hardly been seen in previous years... the reason is that people who disapprove of the measures taken against catholic organisations want to make a show in public that they are loyal to the catholic church". The nazi party certainly attempted to use force and domination to control the people's everyday lives and Hitler was an extremely charismatic leader who gained support whether it was through true support of fear. The essay reflects the oxford dictionary meaning of a totalitarian state. The nazi regime was a one-party government, which monopolized the country through the use of propaganda, terror and technology. However it can be argue that even though the nazi Germany was a one-party state, the nazis weren't adequately organised enough to control the whole country 100%. The Nazis failure to control the economy, and the limited powers they had in social aspects of life (e.g. women and youth and churches) also show that they didn't have complete control. Nonetheless nazi Germany was a one-party state with a very powerful secret police (the Gestapo), which influenced the values into everyday aspects of life. Overall Hitler's Germany is a very good example of what a totalitarian state is/was. ...read more.