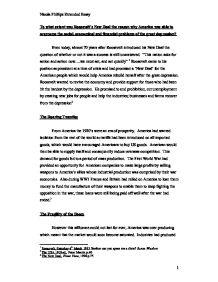 To what extent was Roosevelt's New Deal the reason why America was able to overcome the social, economical and financial problems of the great depression?

To what extent was Roosevelt's New Deal the reason why America was able to overcome the social, economical and financial problems of the great depression? Even today, almost 70 years after Roosevelt introduced his New Deal the question of whether or not it was a success is still unanswered. "This nation asks for action and action now....we must act, and act quickly" 1 Roosevelt came to his position as president at a time of crisis and had promised a 'New Deal' for the American people which would help America rebuild herself after the great depression. Roosevelt wanted to revive the economy and provide support for those who had been hit the hardest by the depression. He promised to end prohibition, cut unemployment by creating new jobs for people and help the industries; businesses and farms recover from the depression2 The Roaring Twenties From America the 1920's were an era of prosperity. America had wanted isolation from the rest of the world so tariffs had been introduced on all imported goods, which would have encouraged Americans to buy US goods. American would then be able to supply itself and consequently reduce overseas competition. This demand for goods led to a period of mass production. The First World War had provided an opportunity for American companies to make large profits by selling weapons to America's allies whose industrial production was comprised by their war economies. Also during WW1 France and Britain had relied on America to loan them money to fund the manufacture of their weapons to enable them to keep fighting the opposition in the war, these loans were still being paid off well after the war had ended.3 The Fragility of the Boom However this affluence could not last for ever, America was over producing which meant that the market would soon become saturated. Industries had produced thousands of goods but the demand was no longer there, as those who could afford the goods already owned them so consumption began to decline. ...read more.

Supporting the people of America The Federal Emergency Relief Administration (FERA) was led by Harry Hopkins who believed that men should be put to work and not be given charity. This agency sent funds to depleting local relief agencies and also funded public work programs, within two hours $5million were given out and deteriorating relief programs were revitalized. The Civil Works Administration (CWA) gave the unemployed jobs building or repairing roads, parks, airports and other public places. This not only provided a physical boost to its 4million workers but also a psychological one.21 Roosevelt had succeeded in creating more jobs, which helped reduce the number of unemployed, to 7.7 million by 1937 from 12.83 million just 4 years before.22 The CWA and FERA also helped repair many public places, which was a beneficial, step in rebuilding America. The National Industrial Recovery Act (NIRA) of June 1933 was formed to boost declining prices and to help businesses and workers. NIRA allowed trade associations in many industries to write codes regulating wages, working conditions, production and prices. "If all employers in each competitive group agree-to pay their workers the same wages-reasonable wages-and require the same hours-reasonable hours-then higher wages and shorter hours will hurt no employer. Moreover, such action is better for the employer than unemployment and low wages, because it makes more buyers for his product. That is the simple idea which is the very heart of NIRA"23 The Public Works Association (PWA) was a part of the NIRA and often regarded as one of the best parts launched projects such as the Grand Coulee Dam on the Columbia River and gave the unemployed jobs helping enforce these new programs. Roosevelt placed a lot of efforts into reducing the rate of unemployment, which is why so many of his proposals were focused around creating new jobs. The Civilian conservation Corps (CCC) was an environmental program, which positioned 2.5million unmarried men in work, maintaining and restoring forests, beaches and parks. ...read more.

"During Franklin Roosevelt's first term, the New Deal did not cure the underlying economic problems. It was the war that did that. Within a matter of months, six million workers found new jobs"33 By 1943 unemployment had been reduced to just 1.07 million from almost 13 million at the height of the depression.34 Without the New Deal, however, the country would still have been in a state of recession, and might have been unable to help with the war effort at all. Generally, Roosevelt's New deal had been a success; it had brought to America a great change, which contributed greatly to the restoration of the country. Child labour was prohibited and a national wage and maximum hours legislation was established. By the time that the New Deal had ended organised labour had more imperative and influential position in American society than it had ever had before. The New Deal had to a great extent reduced the reputation and power of big businesses and put a significant number of measures to stabilise America's economy. It had re-established the public's assurance in society introduced new laws and schemes to help prevent a new depression. In conclusion, the extent of which Roosevelt's New Deal was a success will forever remain unknown. President Roosevelt was a great inspiration to the American people in the 1930's and still today is remembered as one of America's greatest and most influential presidents. Although many may critise the New Deal and the way that Roosevelt dealt with the problems of the depression, there is no way of telling whether or not America would be the super power it is in the present day if Roosevelt hadn't have proposed his schemes and policies which were contained in his New Deal. Word Count: 3956 Appendix 1. Estimated unemployment in America between 1929 and 1943, The USA 1919-1942, Peter Mantin p.63 Year Estimated Unemployment in millions 1929 1.55 1930 4.34 1931 8.02 1932 12.06 1933 12.83 1934 11.34 1935 10.61 1936 9.03 1937 7.70 1938 10.30 1939 9.48 1940 8.12 1941 5.56 1942 2.66 1943 1. ...read more.