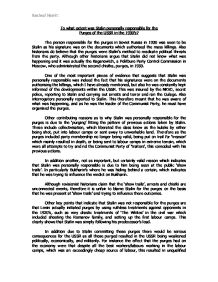 To what extent was Stalin personally responsible for the Purges of the USSR in the 1930's?

To what extent was Stalin personally responsible for the Purges of the USSR in the 1930's? The person responsible for the purges in Soviet Russia in 1930 was seen to be Stalin as his signature was on the documents which authorised the mass killings. Also historians do believe that the purges were Stalin's method to eradicate political threats from the party. Although other historians argue that Stalin did not know what was happening and it was actually the Kaganovitch, a Politburo Party Control Commission in Moscow, who administrated the second chistka, purges, in 1933. One of the most important pieces of evidence that suggests that Stalin was personally responsible was indeed the fact that his signatures were on the documents authorising the killings, which I have already mentioned, but also he was constantly kept informed of the developments within the USSR. ...read more.

In addition another, not as important, but certainly valid reason which indicates that Stalin was personally responsible is due to him being seen at the public 'show trails'. In particularly Bukharin's where he was hiding behind a certain, which indicates that he was trying to influence the verdict on Bukharin. Although revisionist historians claim that the 'show trails', arrests and chistki are unconnected events, therefore it is unfair to blame Stalin for the purges on the basis that he was present at 'show trails' and trying to influence there outcomes. Other key points that indicate that Stalin was not responsible for the purges are that Lenin actually initiated purges by using ruthless treatments against opponents in the 1920's, such as very drastic treatments of 'The Whites' in the civil war which included shooting the Romanov family, and setting up the first labour camps. ...read more.

As a result all three services (navel, air, and army) were severely undermanned and staffed by inexperienced or incompetent replacements. This was very dangerous action to undertake as the onset of war was looming. Therefore if the purges would lead to such drastic consequences why would he initiate it? In conclusion despite there being no conclusive evidence whether or not Stalin was personally responsible for the purges during the 1930's, and despite Stalin authorising the mass killings and benefiting directly due to all his opposition being executed or removed from within the party, which meant that Stalin was free to do what he desired, Lenin did actually instigate the purges which Stalin only continued on doing. Also it is now believed that Ezhov, who was the head of the NKVD between 1936-38, was responsible for the 'Great Purges' and historians have renamed this period the 'Ezhovchiria'. Therefore I believe that Stalin was not responsible for the purges. Rachael Hewitt ...read more.