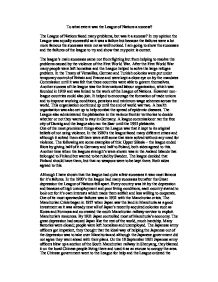 To what extent was the League of Nations a success?

To what extent was the League of Nations a success? The League of Nations faced many problems, but was it a success? In my opinion the League was equally successful as it was a failure but because the failures were a lot more famous the successes were not as well noticed. I am going to show the successes and the failures of the league to try and show that my point is correct. The league's main successes came not from fighting but from helping to resolve the problems caused by the violence of the First World War. After the First World War many people were left homeless and the League helped to solve the large refugee problem. In the Treaty of Versailles, German and Turkish colonies were put under temporary control of Britain and France and were kept a close eye on by the mandates Commission until it was felt that these countries were able to govern themselves. Another success of the league was the International labour organisation, which was founded in 1919 and was linked to the work of the League of Nations. However non-league countries could also join. It helped to encourage the formation of trade unions and to improve working conditions, pensions and minimum wage schemes across the world. ...read more.

and also economic sanctions would be useless without the cooperation of the USA who was Japan's main trading partner. Another thing that could have been done would be to impose military sanctions but neither France nor Britain were willing to risk their armies and navies and even if they did it would require of army of the size of the USSR or the USA and neither of these was a member of the league. The only thing left the league could do would be to try and persuade the countries to reach a compromise. Lord Lytton of Britain was sent to investigate and a year later he produced a report to try and satisfy both sides. It suggested that the Japanese would leave Manchuria but that it would carry on being a semi-independent state free from Chinese rule. In response the Japanese resigned from the league and continued to occupy the Chinese providence known as Jehol. The Manchurian crisis had knock on affects for the league, because now even it's strongest supporters seemed doubtful about whether or not it could maintain world peace. The next big failure for the league came in 1935 in the Abyssinia crisis. In the 1930's almost all of Africa was part of some European empire and only two states remained independent, one of these states was Abyssinia. ...read more.

In December 1932 an agreement for equality was agreed and in January Germany announced that they were coming back. In February Hitler became chancellor and immediately began secretly re-arming. In May Hitler promised not to disarm if in 5 years all other nations destroyed their arms. In June, Britain produced a disarmament plan and in October Germany withdrew from the disarmament conference and later from the league altogether. Disarmament had failed. Many felt that is was because Britain and France were divided on the issue, because in 1935 Britain much to the French dismay signed a treaty with Germany which allowed it to rebuild it's navy as long as it stayed below 35% of Britain's. In conclusion, I still agree with my original statement that the League of Nations was as much a success as it was a failure because although the failures of the League were more public and infamous the successes of the League were equally important if less prominent. In particular I consider that the fact that the League maintained its commitment to peaceful solutions to problems in the face of adversity was its strongest legacy, even though these solutions were not always successful. I believe that the main factor that caused the failure of the League was the Great Depression as this caused the main Powers of the League to become selfish and uncooperative. If the Great Depression had not happened I believe that the League would have been more successful. ...read more.