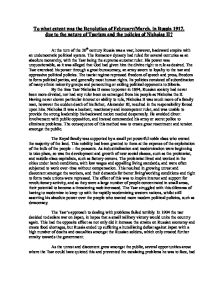 To what extent was the Revolution of February/march, in Russia 1917, due to the nature of Tsarism and the policies of Nicholas

To what extent was the Revolution of February/March, in Russia 1917, due to the nature of Tsarism and the policies of Nicholas II? At the turn of the 20th century Russia was a vast, however, backward empire with an undemocratic political system. The Romanov dynasty had ruled for several centuries as an absolute monarchy, with the Tsar being the supreme autocrat ruler. His power was unquestionable, as it was alleged that God had given him the divine right to rule as desired. The Tsar exercised his power through a great bureaucracy, an army sworn to loyalty to the tsar and oppressive political policies. The tsarist regime repressed freedom of speech and press, freedom to form political parties, and generally most human rights. Its policies consisted of subordination of many ethnic minority groups and persecuting or exiling political opponents to Siberia. By the time Tsar Nicholas II came to power in 1894, Russian society had never been more divided, nor had any ruler been so estranged from his people as Nicholas the II. Having never shown particular interest or ability to rule, Nicholas II was much more of a family man, however the sudden death of his father, Alexander III, resulted in the responsibility forced upon him. Nicholas II was a hesitant, reactionary and incompetent ruler, and was unable to provide the strong leadership his backward nation needed desperately. ...read more.

Stolypin did, on the other hand, manage to improve the agrarian situation somewhat, with new incentives and policies in favour of the peasants, particularly the kulaks. The Tsar lost his most able minister when Stolypin was assassinated in 1911. The Tsar's son, Alexis, was weak as he suffered from hemophilia. This had always reflected negatively on the future of Tsarism, however a monk named Rasputin, who was new at court, appeared to have the ability to stop Alexis's bleeding. Over time, Rasputin gained political influence at court as he was very popular with the Tsarina, and rumors spread about an affair between the two. Rasputin was also very notorious for his sexual escapades, which caused a scandal at court and further deteriorated the Tsar's image. "The Tsar's opponents seized on Rasputin as a sign of the Tsar's weakness and unfitness to rule Russia," states Walsh, page 83. As World War I broke out in 1914, Russia faced an invasion from Germany. This initially created a wave of popular patriotism, which swept throughout the country and united the people behind the Tsar, and anti-government protests were abandoned. However, this reprieve was short-lived. The war quickly turned out to be a disaster for both the tsar's government as well as the people. The 15 million men sent into the war were poorly equipped and armed, factories were inadequately productive and transportation and communication insufficient. ...read more.

In conclusion, it appears that by the beginning of the 20th century, Russia was a country 'ripe for revolution'. As the Tsar became progressively more estranged from his own people, he was concurrently disabling the authority of his own rule. Simultaneously, Russia was becoming increasingly exposed to other European cultures and events, and many people found the various democratic movements inspiring. As modernization began to occur, and people were becoming more educated and literate, they also became more aware of the flaws in their country's politics and began to entertain ideas of democracy and equality. The government responded to problems with violence and oppression on the rising number of opposition, as the Tsar was utterly intolerant and unwilling to compromise, which only increased resentment. A series of scandals and military defeats further deteriorated the image of Tsarism. There had never before in the history of Russia existed so many political organizations and opposition, and as they were gaining more and more support from the proletariat and peasants, which made up the bulk of the people and the army, it was simply a matter of time before an outbreak of revolution would come. It was not the First World War, which caused the revolution of 1917 - it was rather a catalyst. Thus by 1917, it appeared as though revolution was becoming inevitable, due to the nature of Tsarism and policies of Nicholas II. Written by Christina Sophonpanich IB1 16/11/05 ...read more.