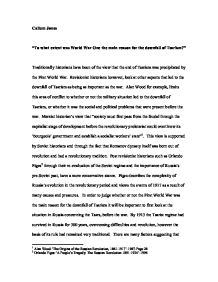 &quot;To what extent was World War One the main reason for the downfall of Tsarism?&quot;

Callum Jones "To what extent was World War One the main reason for the downfall of Tsarism?" Traditionally historians have been of the view that the end of Tsarism was precipitated by the First World War. Revisionist historians however, look at other aspects that led to the downfall of Tsarism as being as important as the war. Alan Wood for example, limits this area of conflict to whether or not the military situation led to the downfall of Tsarism, or whether it was the social and political problems that were present before the war. Marxist historian's view that "society must first pass from the feudal through the capitalist stage of development before the revolutionary proletariat could overthrow its 'bourgeois' government and establish a socialist workers' state"1. This view is supported by Soviet historians and through the fact that Romanov dynasty itself was born out of revolution and had a revolutionary tradition. Post revisionist historians such as Orlando Figes2 through their re-evaluation of the Soviet regime and the importance of Russia's pre-Soviet past, have a more conservative stance. Figes describes the complexity of Russia's evolution in the revolutionary period and views the events of 1917 as a result of many causes and pressures. In order to judge whether or not the First World War was the main reason for the downfall of Tsarism it will be important to first look at the situation in Russia concerning the Tsars, before the war. By 1913 the Tsarist regime had survived in Russia for 300 years, overcoming difficulties and revolution, however the basis of its rule had remained very traditional. There are many factors suggesting that there was a build up of pressure within Russia through its peoples' discontent before the war, such as the economic problems, which helped increase the chances of a revolution. However, in my opinion it seems that the war was the catalyst and also the main reason for revolution in Russia and the eventual downfall of Tsarism. ...read more.

Acton writes this as the country became united behind the common cause of war, and many of the groups of people put their grievances temporarily behind them. However, Acton goes on to mention; "Yet the war proved far longer and more destructive than had been generally expected. The news from the front was grim."9 This view is justified as most people in Russia believed the war would be over quickly and without heavy casualties and gives a reason as to why the Russian people became so frustrated. Acton is a well balanced historian, but he clearly identifies all sides of an argument and presents individual views making them easy to be broken down and analysed. The war had varying effects on the economy of Russia. Russia's economy was already behind that of many of the other strong powers in Europe as its methods were generally old fashioned and unsuccessful. Initially the armaments industry increased with the start of the war and Beryl Williams suggests that the war helped the economy, "it was the war which was to revitalize the stagnating metallurgical industries"10. Williams justifies this view explaining that industrial output "doubled in capital between 1914 and 1917."11 This revisionist viewpoint seems a little uneven as the other impacts on the economy are not looked at in detail. For example the lack of consumer goods that were being produced because of the focus on the armaments goods, led to peasants being angered further and stopped the country operating as previously. Williams seems to be favouring the opinion that matters were not quite as bad during Tsarism as they were made out to be and that it potentially could have survived for longer if the people could have understood this. Supplying food became a problem for the country as peasants tended to want to sell less of their grain due to the depreciating currency through the war period. ...read more.

Peter Kenez suggests that the tsar's enemies were split into two main groups and were "Those who wanted a social revolution and those whose goals were limited to political reform had briefly cooperated in an uneasy alliance."18 This is a more Revisionist view, and seems the most likely as not all people in Russia at this time totally support a revolution overthrowing the regime. It is suggested here that Russians simply disliked Tsar Nicholas II and wanted to replace him with a new ruler. Kenez sees the disintegration of the government in Russia crucial as to why there was a revolution, focusing his argument on the events before the war and the governments failure to deal with the situation. Overall, although many other reasons did contribute to the eventual downfall of tsarism it does seem that the First World War was the main reason why it failed and it was also the catalyst for the revolution. However without the other reasons and problems the Tsarist regime had, it may have survived a defeat in the war. For example if the regime had been successful in the past and the Russian people were happy with their situation, then a lost war may not have had enough influence to overthrow the government, as was demonstrated in the past when the regime had survived war defeats and revolution. It does seem that many Russian people supported the revolutionary cause because they were unhappy with the current Tsar and did not intend to eventually overthrow Tsarism. The First World War emphasised the problems that existed before the war and made the vast majority of Russians begin to resent the government. The initial affects of the start of the war seemed to prolong Tsarism in that it united the country. However, ultimately the war was to speed up the end of the tsarist regime. This makes revisionist historians argument's seem the most reasonable as they bring together the whole situation in Russia before and during the war, and tend not to focus on simply one cause, making them of a balanced opinion. ...read more.