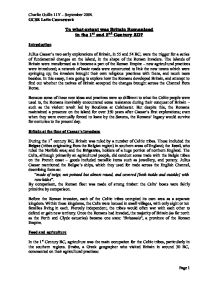 To what extent wasBritain Romanised

To what extent was Britain Romanised in the 1st and 2nd Century AD? Introduction Julius Caesar's two early explorations of Britain, in 55 and 54 BC, were the trigger for a series of fundamental changes on the island, in the shape of the Roman invaders. The islands of Britain were transformed as it became a part of the Roman Empire - new agricultural practices were introduced; a network of basic roads were constructed to link the new towns which were springing up; the invaders brought their own religious practices with them, and much more besides. In this essay, I am going to explore how the Romans developed Britain, and attempt to find out whether the natives of Britain accepted the changes brought across the Channel from Rome. Because some of these new ideas and practices were so different to what the Celtic people were used to, the Romans inevitably encountered some resistance during their conquest of Britain - such as the violent revolt led by Boudicca at Colchester. But despite this, the Romans maintained a presence on the island for over 350 years after Caesar's first explorations; even when they were eventually forced to leave by the Saxons, the Romans' legacy would survive for centuries to the present day. Britain at the time of Caesar's invasions During the 1st century BC, Britain was ruled by a number of Celtic tribes. These included the Belgae (tribes originating from the Belgian region) in southern areas of England; the Iceni, who ruled the Norfolk area; and the Brigantes, holders of a huge portion of northern England. The Celts, although primarily an agricultural people, did conduct some trade with the Belgic tribes on the French coast - goods included metallic items such as jewellery, and pottery. Julius Caesar mentioned the Belgae's ships, which they used for trade across the English Channel, describing them as: "made of twigs, not pointed but almost round, and covered [both inside and outside] with raw hides". ...read more.

The Celts could not understand how a mere mortal, even the Emperor, could be considered to be on an equal level with the gods. The extent to which the Celts hated this practice was demonstrated in Colchester during the first century BC. Colchester, which at the time was the capital of the Britannia province, was the centre of the imperial cult; a temple had been built in the town which was dedicated to the emperor Claudius. As it had been expensive to build and subsequently maintain, the Temple of Claudius was seen by the Iceni tribe as a symbol of oppression: one Celt described it as "[a] symbol of everlasting dominion". For this reason, the Iceni tribe (led by Boudicca) formed a rebellion against the Roman invaders, starting at the Temple of Claudius in Colchester, which was razed to the ground. The rebels then moved on to Verulamium (St Albans) and London, but were defeated by the Roman army, at which point Boudicca swallowed poison to escape capture. Above: An artist's impression of the destruction at the Temple of Claudius, built in Colchester. Source: http://homepage.ntlworld.com/chris.rn/colchester/roman.html Christianity Christianity was, at first, banned under the Roman Empire - Christians faced persecution, and were therefore forced to meet in secret. It was only in 313 AD, under the reign of the emperor Constantine, that the faith was "legalised". Despite this, some people did bring the Christian religion to Britain during the time of the Roman occupation, and the religion slowly grew in prominence - which could explain why Christianity is so prevalent in Britain today. Followers of Christianity used secret symbols as a sign of recognition, of which some examples have been found in Roman buildings in Britain. For example, the "ROTAS" square (shown below) has been found on a wall in Cirencester, which dates from the 2nd or 3rd Century AD. Towards the end of the Roman occupation, in the 4th century, Christianity became a lot more widespread - Lullingstone Villa in Kent was partially rebuilt ...read more.

Despite this, by 400 AD there were many things in Britain which had changed over the 450 years of Roman occupation. Instead of isolated rural communities, the inhabitants slowly gravitated towards the towns, which grew in size and number during the occupation. This led to the development of a road network; in turn, trade and commerce increased. Unfortunately, attacks by the Saxons, Scots and barbarian tribes from the continent on Britannia took their toll, and the island entered a period of decline leading to the Dark Ages. Gildas, a contemporary historian, wrote about the departure of the Romans: "Thereafter Britain was robbed of all her armed forces, her military supplies, her rulers, cruel as they were, her sturdy youth. They followed in the steps of the usurper mentioned above (Maximus), and never afterwards returned." Conclusion The new practises and ideas which the Romans introduced to Britain had a mixed reception. Some aspects of their civilisation were adopted widely, such as their language and the crops that they brought to Britain; meanwhile other aspects, including the imperial cult, were rejected by the Celts. However, the Romans only left Britain at the beginning of the 5th century AD, when the Roman Empire was beginning to decline. Therefore, the Romans held a presence in Britain from 54 BC until at least 400 AD - a period of over 450 years. Their legacy can be seen even today, and therefore I think that the Romanisation of Britain must have had at least some effect. 3219 words Sources used Various authors: Cambridge Latin Course (Cambridge University Press, 1970-98) Various authors: Romans in Britain www.romans-in-britain.org.uk (Unknown): The End of Roman Rule www.postroman.info/endrome2.htm Peter Clayton: A Companion to Roman Britain (Phaidon Press, 1980) Debbie Day: Change and Evolution in Roman Britain www.britarch.ac.uk/ba/ba30/ba30feat.html Peter Lane: Roman Britain (Visual Sources Series) (Batsford, 1980) H. H. Scullard: Roman Britain - Outpost of the Empire (Thames and Hudson, 1979-91) Anthony Thwaite: Beyond the Inhabited World (The Mirror of Britain Series) (Andr� Deutsch, 1976) Charlie Guille 11Y - September 2004. GCSE Latin Coursework Page 1 ...read more.