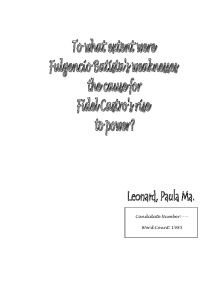 To what extent were Fulgencio Batista's weaknesses the cause for Fidel Castro's rise to power?

INDEX Section Page SECTION A: Plan of the investigation 2 SECTION B: Summary of evidence 3 SECTION C: Evaluation of sources 6 SECTION D: Analysis 8 SECTION E: Conclusion 11 SECTION F: List of sources 12 SECTION A: Plan of the investigation (150 words- maximum: 150 words) The event I am interested in is the rise to power of Fidel Castro in Cuba. Not the revolution itself, but the factors that caused it. Specifically, my inquiry is: to what extent were Batista's weaknesses the cause for Castro's rise to power? In order to answer this, I will focus on Fulgencio Batista's last years in power. My intention is to search for evidence on his government policies and his loss of popularity; I intend to analyze the socio-economic crisis of the time and Batista's weaknesses, trying to study their effects on the Cuban situation. Simultaneously, I will examine other causes for the revolution and evaluate their significance. Thus, I will analyze a source according to which Batista's character played a leading role in the revolution, and another source where other causes are considered (1). Altogether, after this analysis, I will arrive at an answer to my question. SECTION B: Summary of evidence (593 words-maximum: 600) -During the 1940's, food prices in Cuba trebled and the cost of living doubled. Wartime (2) brought about import scarcities and postwar economic opportunities were misused. Therefore, inflation rose. This was the Cuba Fulgencio Batista inherited in 1952, after the revolt he organized once he saw no chance to be elected president in the coming elections. ...read more.

Nonetheless, the source is a primary one and it has the value of being a first-hand account. However, P�rez's seems more reliable. SOURCE D: Analysis of Sources (642 words-maximum: 650) By 1959, when the revolution took place, Cuba was inserted in a global context worth analyzing, as it was of great influence on the gestation of this rebellion. The world was going through a period of confrontation between capitalism (mainly represented by the United States) and communism (mainly represented by the USSR): the Cold War. During the 1950's this war was in the middle of its development and communism was expanding rapidly throughout the world. Several conflicts took place in such decade due to this expansionism: during the first three years, a fight between communism and capitalism took place in Korea, which concluded in the division of the country between a communist North and a capitalist South. The same was happening in Vietnam. In 1955, the USSR established a pact with his satellite countries which nucleated them all, creating, in this way, a strong communist bloc that aimed to expand (17). At the same time, international organizations were starting to be created, in order to defend democracy through economic and political support between the capitalist members. An example was the NATO, created in 1949. In America, the United States started a policy of "mutual security", which meant they would aid, economically and military, all those Latin-American countries that opposed to populist regimes, with the aim to prevent communism from getting to America (18). ...read more.