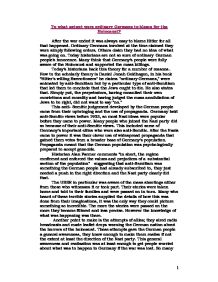 To what extent were ordinary Germans to blame for the Holocaust

To what extent were ordinary Germans to blame for the Holocaust? After the war ended it was always easy to blame Hitler for all that happened. Ordinary Germans involved at the time claimed they were simply following orders. Others claim they had no idea of what was going on. Today historians are not so sure of ordinary German people's innocence. Many think that Germany's people were fully aware of the Holocaust and supported the mass killings. Today's historians back this theory for a number of reasons. New to the scholarly theory is Daniel Jonah Goldhagen, in his book "Hitler's willing Executioners" he claims "ordinary Germans," were animated by anti-Semitism but by a particular type of anti-Semitism that led them to conclude that the Jews ought to die. He also states that. Simply put, the perpetrators, having consulted their own convictions and morality and having judged the mass annihilation of Jews to be right, did not want to say "no." This anti- Semitic judgement developed by the German people came from their upbringing and the use of propaganda. Germany held anti-Semitic views before 1933, so most Nazi ideas were popular before they came to power. ...read more.

To many Germans the fate of the Jews was of minimal interest, was this a matter of passive complicity or should we look upon it as a sign of approval. After all the killing process could not have taken place without the willingness or cooperation of ordinary German men and women. The survival of the holocaust depended on ordinary Germans to be train drivers. It also needed someone to put gas in the chambers and those to implement the killing Many of these ordinary Germans were volunteers in the German army, SS and the Killing squads known as the Einsatzgruppen. So why did professionals such as teachers, lawyers and doctors feel the need to join such brutal groups. When the diaries of the reserve police battalion 101 were found they unearthed some shocking statistics, the majority of the members of this group were ordinary German citizens; only 30% were fully fledged Nazi party members, one in thirty men were SS members. The average age was thirty six and eighty percent of these men went home to their families. There are two given reasons why they joined up the first is peer pressure, they just couldn't resist and say no. ...read more.

After 1917 the Soviet Union attempted to eliminate a whole class of people. He also suggests that the holocaust should also be seen as part of a reaction to Bolshevik mass murder. He claims Germany acted in self defence against an enemy who was also waging a war of annihilation In conclusion it is fair to say that the Holocaust was a mainly a German enterprise. I feel that the German people could have done more to ease the suffering of the Jewish people. I would agree with Goldhagen when he states that the German peoples anti-Semitic views somewhat blurred their moral Judgement. However it is fair to give some leeway and excuse some German people for their blind ignorance of the matter due to Hitler's secretive ways, convincing Nazi propaganda and reasons as to where the Jewish people were being taken put the German people at ease. Some were more involved than other where it comes to killing and helping. I believe some German people were very sympathetic to the plight of the Jews and did want to help they just did not know how. It surely should be agreed upon that the German people as a whole share a collective responsibility for what happened to the Jewish people. ?? ?? ?? ?? 1 ...read more.