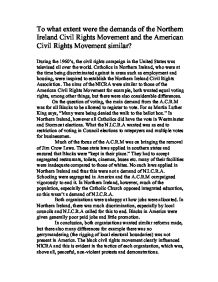 In Northern Ireland, however all Catholics did have the vote in Westminster and Stormont elections. What the N.I.C.R.A wanted was as end to restriction of voting in Council elections to ratepayers and multiple votes for businessmen. Much of the focus of the A.C.R.M was on bringing the removal of Jim Crow Laws. These state laws applied in southern states and ensured that Blacks were "kept in their place." ...read more.

Both organisations were unhappy at how jobs were allocated. In Northern Ireland, there was much discrimination, especially by local councils and N.I.C.R.A called for this to end. Blacks in America were given generally poor paid jobs and little promotion. In conclusion, both organisations wanted similar reforms made, but there also many differences for example there was no gerrymandering (the rigging of local electoral boundaries) was not present in America. The black civil rights movement clearly influenced NICRA and this is evident in the tactics of each organisation, which was, above all, peaceful, non-violent protests and demonstrations. ...read more.