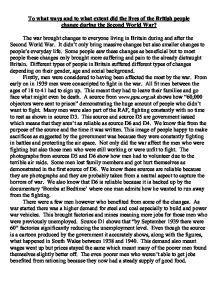 To what ways and to what extent did the lives of the British people change during the Second World War? The war brought changes to everyone living in Britain during and after the Second World War. It didn't only bring massive changes but also smaller changes to people's everyday life. Some people saw these changes as beneficial but to most people these changes only brought more suffering and pain to the already distraught Britain. Different types of people in Britain suffered different types of changes depending on their gender, age and social background. Firstly, men were considered to having been affected the most by the war. From early on in 1939 men were conscripted to fight in the war. All fit men between the ages of 18 to 41 had to sign up. This meant they had to leave their families and go face what might even be death. A source from www.ppu.org.uk shows how "60,000 objectors were sent to prison" demonstrating the huge amount of people who didn't want to fight. Many men were also part of the RAF, fighting constantly with no time to rest as shown in source D3. ...read more.

Not only did rationing affect women greatly but many women were also forced to work. This meant long hours for little pay. This included working in factories and agricultural work. The cartoon in source B5 shows how it affected all women especially upper class women who weren't used to doing any work. To some other women these changes were seen as a good thing. Work gave them the opportunity to earn money and become independent. Kathleen Teal-Jones is a prime example of this. She describes in an interview, in the documentary 'Bombs at Bedtime', how much she enjoyed work and how it gave her the freedom and independence to turn her life around. We know this was reliable because it was personal experience and it was present in a very well researched documentary. Not only this but in the speech by Clement Atlee (top of source B3) is says that these women were doing "precision engineering jobs which a few years ago would have made a skilled turner's hair stand on end". This source isn't as reliable though because it was said by a Deputy Prime Minister suggesting it was part of a propaganda speech but a report from an independent source shows how in "December 1942 8.5 million women aged 19 to 46 had registered. ...read more.

These were produced by the government however suggesting that they were used as propaganda therefore not being very reliable. There is however a quote from a modern historian that states "for others, it was the best time of their lives and they enjoyed the fresh country air, good country food and lots of new things to do". This is reliable because it gives evidence that both sides were looked at before making this statement. As you can see there were many changes that affected different people. Most of the changes were very dramatic and for the worse but luckily they were all in the relatively short term. Most people suffered from the Blitz, rationing, conscription, work etc but there is evidence that not everyone suffered. Unemployed men, poor families and children and some of the younger women without children found them selves better off during the war. Not only this but after the war there was a great sense of union. This was discovered through the Beveridge Report in 1942 which wanted to remove ignorance, squalor and poverty. Even though many people suffered from the war a character from the 1941 film 'Dawn Guard' said, "We found out in this war how we were all neighbours, and we weren't going to forget it when it was all over". ...read more.