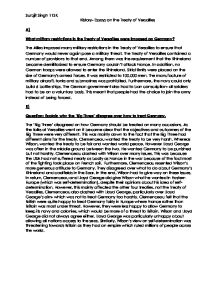 A) What military restrictions in the Treaty of Versailles were imposed on Germany? The Allies imposed many military restrictions in the Treaty of Versailles to ensure that Germany would never again pose a military threat. The Treaty of Versailles contained a number of provisions to that end. Among them was the requirement that the Rhineland became demilitarized to ensure Germany couldn't attack France. In addition, no German troops were allowed to enter the Rhineland. Strict limits were placed on the size of Germany's armed forces. It was restricted to 100,000 men. The manufacture of military aircraft, tanks and submarines was prohibited. Furthermore, the navy could only build 6 battle ships. The German government also had to ban conscription- all soldiers had to be on a voluntary basis. This meant that people had the choice to join the army instead of being forced. B) Question: Explain why the 'Big Three' disagree over how to treat Germany. The 'Big Three' disagreed on how Germany should be treated on many occasions. As the talks at Versailles went on it became clear that the objectives and outcomes of the Big Three were very different. This was mainly down to the fact that the Big Three had different aims for the treaty. Clemenceau wanted the treaty to be very harsh. Whereas Wilson, wanted the treaty to be fair and wanted world peace. However Lloyd George was often in the middle ground between the two. He wanted Germany to be punished but not harshly. Clemenceau clashed with Wilson over many issues. This was because the USA had not suffered nearly as badly as France in the war because of the fact most of the fighting took place on French soil. ...read more.

The Saar land was also an important area of industry which was also seen as a vital source of revenue. Germanys European borders were very extensive. Furthermore, the treaty also forbade Germany to join with its former ally Austria. This was also known as Anschluss. Germany lost 12.5% of its population as a result of the loss of territory. This meant that whilst self-determination was given to countries such as Estonia, it also meant that people in these areas were also mainly German. This meant that German-speaking people were divided. This went against their idea of self-determination and further angered them and made the treaty unfair. Germany lost 16% of its coalfields and almost half of its steel and iron industries. Under the treaty of Versailles the Rhineland became demilitarized. This was done in the aim of stopping Germany from attacking its neighbour France as they both shared borders. As a result of this no German troops were allowed into the Rhineland. The loss of territory was a massive factor which affected German pride. The territories which Germany lost were vital sources of income. Now that they had been taken away, it made paying reparations even harder. It was made even worse as Danzig was given to Poland. This was a port which would've been used for trade. Overall the loss of territory was a major blow to German pride and to its economy. The disarmament terms upset Germany. An army of 100,000 men was very small for a country of Germany's size. The army was also a symbol of German pride and strength. Despite Wilsons fourteen points calling for disarmament of all countries, none of the Allies disarmed to the extent that Germany was disarmed in the 1920s. ...read more.

This was mainly because it was seen as hypocritical and showed the double standards of Germans who wanted a fairer treaty. This was because of the treaty that Germany had given to Russia was something even harsher than the Treaty of Versailles. It was also a diktat. But Germany got off lightly with this treaty as it wasn't as harsh as the treaty of Brest-Livtosk. However if Germany had received a treaty that wasn't as harsh then the German people wouldn't have been outraged. As a result, the German people stored this anger. I believe that the harshest term of the treaty was the reparations payments. This is because France and Britain demanded that Germany pay huge reparations that further strained the German economy to well beyond the breaking point. Germany's industry was destroyed, unemployment was through the roof, and the currency known as the Mark was worthless. Hyperinflation added to the misery. Germany's cries for relief from these harsh terms were rejected. The French and British knew full well that that Germany couldn't possibly repay that amount of money - most of its industry was concentrated in the Rhineland, which had been occupied by Allies. As a result of the humiliation and the unfairness of this treaty, it allowed parties such as the Nazi party to gain popularity. As a result Hitler was elected as chancellor and within a few years of his reign he became a Fuhrer. Due to the fact this treaty was very harsh for people living in Germany at the time such as Hitler, they wanted revenge. As a result World War Two began in 1938. ?? ?? ?? ?? Surbjit Singh 11SK History- Essays on the Treaty of Versailles ...read more.

A superb answer, with excellent detail and clear understanding throughout. The author does well to consider some unusual aspects of the question. The conclusion is too detailed however; here the author needed to directly answer the question by briefly referring to key evidence, not by repeating everything that had been discussed in the essay itself. 5 out of 5 stars.