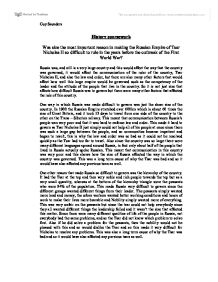 History coursework Was size the most important reason in making the Russian Empire of Tsar Nicholas II so difficult to rule in the years before the outbreak of the First World War? Russia was, and still is a very large country and this would affect the way that the country was governed, it would affect the communication of the ruler of the country, Tsar Nicholas II, and also the law and order, but there are also many other factors that would affect how well this large empire would be governed such as the competency of the leader and the attitude of the people that live in the country. So it is not just size that affects how difficult Russia was to govern but there were many other factors that affected the rule of this country. One way in which Russia was made difficult to govern was just the shear size of the country. In 1900 the Russian Empire stretched over 600km which is about 60 times the size of Great Britain, and it took 13 days to travel from one side of the country to the other on the Trans - Siberian railway. This meant that communication between Russia's people was very poor and that it was hard to enforce law and order. This made it hard to govern as Tsar Nicholas II just simply could not help all of his people at once since there was such a large gap between the people, and so communities ...read more.

One other way in which made Russia a badly governed country in the period was the competency of the Tsar. It wasn't just the size of Russia the affected the leadership, it was the leader himself. Tsar Nicholas II, although leader of Russia was not a great leader, he did not see his people he just believed that they were happy and that they did not need his help. Some noble Russians who were close to the Tsar would tell him what he wanted to hear and they would not explain the problems that needed to be resolved, and because the Tsar believed them he did not bother to visit his people, but continued to let them suffer. Nicholas was also a bad Tsar because he believed that democracy would lead to the downfall of Russia and so did not give any power to anybody else and so had very little help to govern the country and also his wife influenced him to much and got what she wanted, not what the people of Russia wanted. This was a short term cause and so this would not have affected any other previous tsars but was a problem of Tsar Nicholas. Another reason in which made the country of Russia governed badly was the opposition groups. These groups were called the: Liberals, Social Revolutionaries and the social democrats who where split up into the Mensheviks and the Bolsheviks. ...read more.

Nicholas had only one son out of 5 children called Alexei, who was heir to his throne, but unfortunately had a rare blood disease called haemophilia, this meant that his blood did not clot and so a minor cut meant that he could possibly bleed to death. This was not publicly known at this time as it could have affected the mood of the Russian people. Rasputin was known for his 'healing powers' and it is believed that whenever Alexei was bleeding and Rasputin was in the same room, the bleeding would stop. This ultimately led to Tsar Nicholas being influenced on his rule by Rasputin and this affected him badly. This meant that Rasputin would get what he wanted whilst some people in Nicholas' empire would be suffering and overall this made it difficult to govern this huge empire. This was only a short term effect and would not have been a problem for any previous Tsars. Overall, I believe that, although there are many different things and people that made it hard for Tsar Nicholas to govern the Russian empire before the first World War, but that size was the biggest factor in making Russia difficult to govern, even though so many Tsars before Nicholas had managed to handle the difficulties of looking after such a huge country. If Russia was half the size I think that Nicholas would have done a much better job of being Tsar and would have been a much more popular Tsar than he actually was. ?? ?? ?? ?? Guy Saunders ...read more.