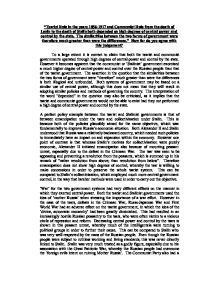 Tsarist Rule in the years 1856-1917 and Communist Rule from the death of Lenin to the death of Stalin both depended on high degrees of central power and control by the state. The similarities between the two forms of government were therefore much greate

The historian J. Grenville also accepts this view when analysing the degree of central power exorcised by Alexander II, especially in dealing with the policy of emancipation. Grenville states, "only with reluctance that Alexander took up the root cause of Russia's social ills". The historian puts across the view that the tsar was as if 'carried along' by the will for emancipation by "selected both true reformers such as Dimitri Milyutin and...Dimitri Tolstoy". This view of the tsars can be contrasted with Stalin who had a very 'hands on' approach to policy formulation and implementation. Stalin was seen to be the 'master creator' of the Five-Year Plans and collectivisation programme. Much more power was vested in Stalin's position, which allowed him to dictate policy agenda and its execution. This is one of the fundamental reasons for the success of his policies, whereby central power allowed him to rapidly industrialise the country in the space of only 11 years before the Second World War. Although one may consider collectivisation to be a major flaw in the perception of Stalin having a high degree of central power and control over the state in the way that it was considered to be a policy failure; this is not necessarily correct. This is in fact because Stalin's extreme central power and control is remonstrated by the manner in which collectivisation was performed. ...read more.

On a basic level this can be shown in the way that by the 1950s no one would dare challenge Stalin's authority, whereas during the tsarist period there had been two revolutions against the monarchy. Through propaganda, and economic and military successes, Stalin had created a perception of himself as a godly figure who was the 'guardian' of Mother Russia. This can be contrasted to the tsarist figureheads whose divine right to autocracy rule over Russia had diminished over the period, especially due to successive defeats in major wars. Whereas Stalin towards the end of his dominance maintained totalitarian control over the country, the tsars relied on support from various political classes in society, namely the nobility. The tsarist system's weakness is also demonstrated by their attempts to appease the peasantry through reform, whereas Stalin did not depend on any interaction with the general public. The difference between the two forms of ruling government is fundamentally shown by the reaction to them from the actual Russian people. Whereas low living standards under the tsars was seen to be the 'spark' for peasant unrest, this was not the case under Stalin under whom they experienced just as bad living standards. However the essential difference in this case was that the Russian people were prepared to sacrifice their living standards for the Great Patriotic struggle, whereby Russia would be rapidly transformed into a great economic superpower. ...read more.