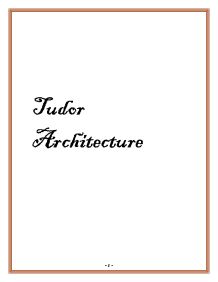 Tudor Architecture What materials were used, how, why and where? Jetties Tudor streets were very dark places, because of the way timbered houses were built. Each storey jutted out a little further than the one below - sometimes by more than a metre. The overhangs were called jetties. Sometimes the houses were so close together at the top, it was said that you could shake hands with your neighbour across the street. The houses were probably built with jetties either to make more room or to protect the lower floors from bad weather Timbering The Tudors used newly cut wood - usually oak, elm or ash - to build a timbered house, because this was easier to saw. Tree trunks were laid across a saw-pit, and cut with an enormous two man saw. One sawyer stood in the pit and the other on the edge of it. A special tool called an 'adze' was then used to smooth the wood. Carpenters often cut all the joints for a new house in their own back yard, numbering all of them so that they could be put together on the site. You can see the marks on the beams in the picture these were to make sure each piece of wood was put in the right place. Primary Evidence An Italian visitor described how the English built their homes: 'First they construct a frame of wood joined together with wooden pegs and then between one layer of wood and another they put bricks. ...read more.

This is where the emphasis is on vertical lines that cover the interior walls and move up to become vertical stone bars over the windows. Styles before 1500 and up to 1750 Frame This is a cheaper alternative than stone and is used in houses and ordinary buildings, as compared to the great Cathedrals and churches using masonry. The framework of uprights and horizontals takes the weight and then its walls could be thin outer 'skins'. The spaces between the frame's uprights and horizontals can be filled to produce a wall. The techniques remained the same from the Middle Ages through to the 17th century. Carpenters are highly skilled and would make timber frames for the walls and roofs. These could be simple and rectangular, or have extra diagonals added. When the carpenter's work was finished, other craftsmen filled in the spaces between the timbers to make a solid wall. The most common filling was wattle and daub, as described in the materials section. The upper classes had grander buildings called Halls. These used a hammer -beam design with great arched braces. Some nobles also incorporated stone into their Halls. Stone Built Manors. Due to the high status symbol of stone, ambitious nobles wanted it for their halls. Stone-built halls usually had similar layouts to the wooden style. Stone was fireproof so masons were often allowed to make a highlight of the kitchen area e.g. the tower like kitchen at Stanton Harcourt in Oxfordshire with its corners arched to take an 8-sided wooden roof. ...read more.

The state rooms above are given a more elegant look. The facades are symmetrical and the walls of brick which are rendered to be pale in colour. There is a triple Venetian window with a central arched heading. This style was widely copied, mainly because Burlington had a strong personality and led an influential group of architects and designers around him. Also, Colin Campbell who designed many of the buildings published his drawings in a lavish series of volumes aimed at rich patrons and architects. Holkham Hall In Norfolk is the grandest Palladian architecture finishing after 25 years of construction in 1762. This has magnificence and simplicity. It has an elegant exterior, influenced by Burlington's House. The interior is intended to show off all the paintings, sculptures, books and other items acquired by Thomas Coke when in Italy. There are strong colours, rich materials and dramatic forms e.g. the hall has curving rows of Ionic columns, a gilded frieze and extraordinary ceiling. This Palladian style was to be copied to smaller city dwellings. The brickwork, sash windows and elegant details were soon appearing in small terraced town houses, creating the Georgian Town House. Most of the houses were laid out in a similar way and the structure was controlled by law to control the quality of the building. The Circus in Bath respects the traditions of classical design, with simple Doric on the bottom, then Ionic and the elaborate Corinthian on the top. This was started in 1754 and is the most famous neo-classical fa�ade in the world. ?? ?? ?? ?? - 1 - ...read more.