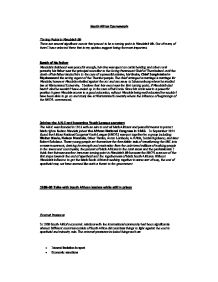 South Africa Coursework Turning Points in Mandela's life There are several significant events that proved to be a turning point in Mandela's life. Out of many of them I have selected three that in my opinion suggest being the most important. Death of his father Mandela's childhood was peaceful enough, his time was spent on cattle herding and other rural pursuits, his father was the principal councillor to the Acting Paramount Chief of Thembuland until the death of his father landed him in the care of a powerful relative, his Uncle, Chief Jongintaba in Mqekezweni the acting regent of the Thembu people. The chief arranged a marriage a marriage for Mandela, however Mandela rebelled against the act and ran away to Johannesburg where he studied law at Wattersrand University. I believe that this event was the first turning point; if Mandela's dad hadn't died he wouldn't have ended up in the care of his Uncle. Since his uncle was in a powerful position it gave Mandela access to a good education, without Mandela being well educated he wouldn't have been able to go on and study law at Wattersrand University where the influence of beginnings of the ANCYL commenced. ...read more.

In 1985 the American Mahattan bank refused to continue lending money to South Africa, Other banks also refused to lend money until the government got rid of apartheid. Dozens of international companies withdrew investments from South Africa including Barclays and Esso. The USA passed an anti-apartheid act to encourage US firms to take money out of South Africa. In 1986 both the USA and EEC imposed against South Africa. They had two affects, first they cost South Africa millions of pounds over the next few years and secondly black employment in township doubled. Demonstrations Bristol anti-apartheid group demonstrated in Broadmead to Dr Verwoods treatment of political prisoners. The Bristol anti-apartheid group also made several arrangements one of which included an interdenominational meeting to hear Bishop Trevor Huddleston speak on the immortality of apartheid. Leaflet handouts In the 1960's 800 leaflets were distributed at the entrance to Avonmouth Docks. Four members of the Bristol anti-apartheid group urged a boycott on trade with South Africa. Five thousand leaflets had been printed and follow up campaigns were planned at the factories of Bristol Aeroplane co. and Bristol Siddeley Engines. Sanctions did not bring a sudden end to apartheid because the sanctions did not cover everything and because too many companies found ways round the laws and went on trading. ...read more.

consisted in containing peace and transforming the conditions of South Africa making it a country where all races would be equivalent. Apartheid was officially brought to an end. I conclude by saying that without both Nelson Mandela and F.W de Klerk the end to apartheid would have not been possible. They both attempted ways to change the troubled conditions of South Africa President de Klerk was the first white individual that used his supremacy to change the state of apartheid. He realised that a transformation was going to have to take place in South Africa, and did not believe in the majority rule. However Mandela fought for the rights of all races to live in equal conditions and his involvement with the ANC and ANCYL meant that although once he was in prison he was in a enclosed atmosphere, people in South Africa carried on fighting for their rights. Also his dedication fled through countries internationally and influenced other people to end apartheid. For apartheid and minority rule to end it needed the both of F.W de Klerk and Mandela to converse with one another about the dilemmas and in de Klerk's case, be willing to make compromises. The compromises that they both made had a big impact on South Africa as a united country ...read more.