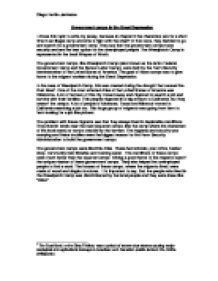 US Government Camps in the Great Depression

Government camps in the Great Depression I chose this topic to write my essay, because in chapter 6 the characters are for a short time in an illegal camp and after a fight with the sheriff of that state, they decided to go and search for a government camp. They say that the government camps have security and are the best option for the unemployed people. The Weedpatch Camp is represented in the book Wrapes of Wrath. The government camps, like Weedpatch Camp (also known as the Arvin Federal Government Camp and the Sunset Labor Camp), were built by the Farm Security Administration of the United States of America. ...read more.

One of the most affected cities of the United States of America was Oklahoma. A lot of farmers of this city moved away and migrated to search a job and survive with their families. This people migrated in a big amount to California, but they weren't the unique. A lot of people of Arkansas, Texas and Missouri moved to California searching a job too. This huge group of migrants was going from farm to farm looking for a job like pickers. ...read more.

The conditions of these camps were much better than the squatter camps. Giving a good home to the migrants wasn't the unique mission of these government camps. They also helped the unemployed people to find a work. The houses of these camps, where the migrants lived, were made of wood and single structures. It is important to say, that the people who lived in the Weedpatch Camp was discriminated by the local people and they were knew like "okies". 1 The Dust Bowl, or the Dirty Thirties, was a period of severe dust storms causing major ecological and agricultural damage to American and Canadian prairie lands in the 1930s. (Wikipedia) ?? ?? ?? ?? Diego Farf�n Jamieson ...read more.