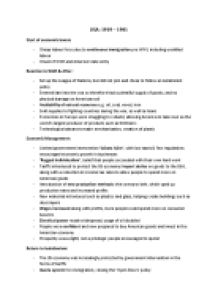 ﻿USA: 1919 ? 1941 Start of economic boom: * Cheap labour force due to continuous immigration pre WWI, including unskilled labour * Onset of WWI and America?s late entry Reaction to WWI & After: * Set up the League of Nations, but did not join and chose to follow an isolationist policy * Entered late into the war so therefore had a plentiful supply of goods, and no physical damage on American soil * Availability of natural resources e.g. oil, coal, wood, iron * Sold supplies to fighting countries during the war, as well as loans * Economies in Europe were struggling to rebuild, allowing America to take over as the world?s largest producer of products such as fertilisers * Technological advances made: mechanisation, creation of plastic Economic Management: * Limited government intervention ?laissez-faire?, with low taxes & few regulations encouraged economic growth in businesses * ?Rugged individualism?, belief that people succeeded with their own hard work * Tariffs introduced to protect the US economy: import duties on goods to the USA, along with a reduction in income tax rates to allow people to spend more on American goods * Introduction of new production methods: the conveyor belt, which sped up production rates and increased profits * New materials introduced such as ...read more.

on alcohol * People were driven to the black market to consume alcohol, including speakeasies which relied on corruption by paying off law enforcement officers * Smuggling of alcohol also became common (rum running), and some doctors provided ?medicinal whiskey? * Some of the illegally brewed alcohol was not checked and this led to poisoned alcohol * This led to the rise in organised crime, or ?gangsterism?, with one notable figure being Al Capone: Chicago?s speakeasies, bookmakers, nightclubs etc. * These figures were initially considered glamorous, being in a high social position and often donating their own money to help the needy (soup kitchens). This however ended with the St Valentine?s Day Massacre, an organised shooting in broad daylight Racism & Intolerance: * ?The Red Scare?, where people became worried that communism was beginning to take over the USA, leading to deportations of immigrants suspected of having links. Anarchy was also widespread, including the Sacco and Vanzetti case, which led to their execution on flimsy evidence and their rights not granted in court * WWI: Fought in Europe and many believed that the US should isolate itself from Europe?s issues * ?Immigrant Quality?: New immigrants were often perceived to be low skilled, with little education, and many lived in ghettos that were associated ...read more.

making people too dependent on the government * Businesses were angry that trade unions were allowed in the workplace, calling it unfair interference * New Deal was seen as ?socialist? and therefore ?un-American?, and taxing the rich would discourage capitalism * The Supreme Court was mainly consisted of Republican judges who were able to delay these policies * Huey Long had a policy of ?Share our wealth?, taxing the rich to give $5000 to the poor per year, allowing them to spend on US goods/services. He planned to stand against FDR in the presidential elections but was assassinated * Dr Townsend wanted to provide $200 per month for the elderly, who would have to spend it all in order to provide a boost to the economy * Charles Coughlin denounced the New Deal as not doing enough and being ?anti-God?, broadcasting his opinions to over 40 million listeners The New Deals were successful in bringing about lower unemployment rates, as well as providing money for the needy. However, it failed to allow the USA to reach employment rates pre-depression, and another depression hit in 1937. It took WWII in the end for the US economy to return to normal, with the Lend-Lease Act allowing the US to trade military equipment to other countries. ...read more.