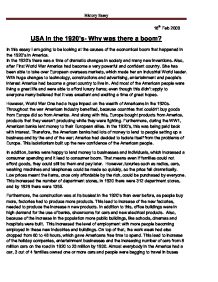 16th Feb 2009 USA in the 1920's- Why was there a boom? In this essay I am going to be looking at the causes of the economical boom that happened in the 1920's in America. In the 1920's there was a time of dramatic changes in society and many new inventions. Also, after First World War America had become a very powerful and confident country. She has been able to take over European overseas markets, which made her an Industrial World leader. With huge changes to technology, constructions and advertising, entertainment and people's interest America had become a great country to live in. And most of the American people were living a great life and were able to afford luxury items; even though this didn't apply to everyone many believed that it was excellent and exciting a time of great hopes. However, World War One had a huge impact on the wealth of Americans in the 1920s. Throughout the war American industry benefited, because countries that couldn't buy goods from Europe did so from America. And along with this, Europe bought products from America, products that they weren't producing while they were fighting. Furthermore, during the WW1, American banks lent money to their European allies. ...read more.

These increased road constructions, more petrol stations and more restaurants and hotels. Advertising also played a part in the boom, these convinced people to buy their items. However, Advertising took place on the posters, radio newspapers, magazines and cinemas; they encouraged people to buy more. When something new had come along everyone had to buy it. It was like competitions between Americans, to see who could get the better things. Also the first newspaper Daily News was introduced in 1919 and many others soon after followed in the 20;s. Magazines changed society as people were more interested in entertainment and people spend more time on fashion, sport and parties. American public did not only buy goods, they also invested on the Wall Street Stock market and spent on more entertainment, as I said before. As more shares were bought, the businesses expanded even more, and output production increased more. Also the taxation was kept low and businesses and companies were able to keep much of the profit to invest in new factories that produced goods at a cheaper price. Moreover, Workers wages were going up slightly as they were taxed less, which meant again more money to spend. However, one of the main reasons that caused boom was the confidence in Americans. ...read more.

In the long term, I think the growth of industries, constructions and low unemployment caused the economical boom. As I mentioned before, people were crazy on the new products, so the factories had to produce products in high quantities, which meant they also needed more employers. I think that the low unemployment made a huge difference in America, as more people had a steady income which meant again more money to spend. As the population slowly increased, more public buildings were built, which again meant more jobs. I believe that the boom wouldn't happen if the number of industries stayed the same, which meant the same number of unemployment and the same amount of money to spend. In my conclusion I would like to say that America experienced an economic boom in the 1920's, because of all those small and big reasons that I mentioned before. And I believed that the confidence that America gained from isolationism and from large numbers of profitable businesses after WW1 lead to many changes in society, which of course helped to cause boom. I also think that the major factor that caused Economical boom was the increase in new industries. And the Industrial boom of America is what really caused an Economic boom of the country. By: Jana Tian, 10M ?? ?? ?? ?? History Essay ...read more.