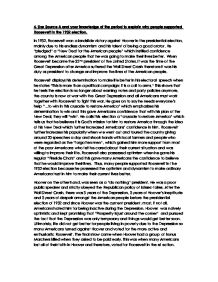 4. Use Source A and your knowledge of the period to explain why people supported Roosevelt in the 1932 election. In 1932, Roosevelt won a landslide victory against Hoover in the presidential election, mainly due to his endless dynamism and his talent of being a good orator. He "pledged" a "New Deal for the American people" which instilled confidence among the American people that he was going to make their lives better. When Roosevelt became the 32nd president of the United States, it was the time of the Great Depression after America suffered the Wall Street Crash therefore it was his duty as president to change and improve the lives of the American people. ...read more.

Roosevelt further increases his popularity when we went out and toured the country giving around 20 speeches a day and shook hands with local farmers and people who were regarded as the "forgotten men", which gained him more support from most of the poor Americans who felt he cared about their current situation and was willing to improve their life. Roosevelt also possessed optimism when he gave his regular "Fireside Chats" and this gave many Americans the confidence to believe that he would improve their lives. Thus, many people supported Roosevelt in the 1932 election because he possessed the optimism and dynamism to make ordinary Americans trust in him to make their current lives better. ...read more.

Ultimately, life did not get better for people living in poverty due to the Depression so many Americans turned against Hoover and voted for the more active and enthusiastic Roosevelt. The final straw came when Hoover had a group of Bonus Marchers killed when they asked to be paid early. This was when many Americans lost all of their faith in Hoover and therefore, voted for Roosevelt in the election. Thus, it can be seen that there are major differences between the more active and determined Roosevelt and the "do nothing" president Hoover. Therefore, many people supported Roosevelt in the election because he was more active and promised to improve their lives which led to his landslide victory in the 1932 election. (Word Count: 583 words) ...read more.