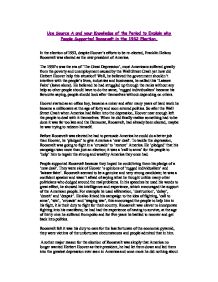 Use Source A and your Knowledge of the Period to Explain why People Supported Roosevelt in the 1932 Election.

Use Source A and your Knowledge of the Period to Explain why People Supported Roosevelt in the 1932 Election. In the election of 1932, despite Hoover's efforts to be re-elected, Franklin Delano Roosevelt was elected as the new president of America. The 1930's was the era of 'The Great Depression', most Americans suffered greatly from the poverty and unemployment caused by the Wall Street Crash yet how did Herbert Hoover help this situation? Well, he believed the government shouldn't interfere with the people's lives, industries and businesses, he called this 'Laissez Faire' (leave alone). He believed he had struggled up through the ranks without any help so other people should have to do the same, 'rugged individualism' became his favourite saying, people should look after themselves without depending on others. Hoover started as an office boy, became a miner and after many years of hard work he became a millionaire at the age of forty and soon entered politics. So after the Wall Street Crash when America had fallen into the depression, Hoover near enough left the people to deal with it themselves. When he did finally realise something had to be done it was far too late and the Democrat, Roosevelt, had already been elected, maybe he was trying to redeem himself. Before Roosevelt was elected he had to persuade America he could do a better job than Hoover, he 'pledged' to give America a 'new deal'. To tackle the depression, Roosevelt was going to fight in a 'crusade' to 'restore' America. He 'pledged' that his campaign was more than just an election; it was a 'call to arms' for the people to 'help' him to regain the strong and wealthy America they once had. People supported Roosevelt because they hoped he could bring them his pledge of a 'new deal'. They were sick of Hoover 's opinions of 'rugged individualism' and 'laissez faire'. ...read more.

Why do you think these two people Disagree about the New Deal? Explain your answer. These two sources are very different in opinion. source J written by a self-made business man, S.B. Fuller is strongly against Roosevelt and the New Deal whilst source K written by Francis Perkins, a Labour secretary in the 1930's is in favour of it. Fuller opposes the New Deal because he is a businessman, he barely benefited from the New Deal, he lost profits as he was forced to pay employers a minimum wage, trade unions were set up to protect the workers and there was far more legislation concerning workers and their needs. Although most businessmen didn't reach bankruptcy, many lost huge profits, which greatly affected their businesses. 'The New Deal hurt us' Fuller says, when mentioning 'us' he means all businessmen who struggled through the New Deal under Roosevelt's leadership. Fuller complains that Roosevelt was helping the unfortunate too much; they should fend for themselves to give 'confidence' and 'initiative'. He implies that the poorer people of America should be left to 'get hungry' rather than being given everything on a plate. Businessmen and richer people were also forced to pay higher taxes to pay for the rebuilding of America's economy. This did not please the rich; many believed they shouldn't have to pay for Roosevelt to help the poorer people whilst they hardly benefit. Perkins wrote 'The Roosevelt I Knew' in 1947. Perkins supported Roosevelt and source K strongly illiterates this, she highlights the benefits of the New Deal, 'a better chance in life', 'making life better for ordinary people'. She was a secretary for Labour and it is obvious she agrees with the policies and schemes brought about by Roosevelt and the New Deal. Unlike Fuller, Perkins benefited greatly from the New Deal; it gave her a high-powered job in politics, which is rare for a woman to have but Roosevelt supported and encouraged women in the workplace. ...read more.

Source D shows the ironic contrast between the happy white family with two children and a dog driving a fast car living the 'American way' with a line of poverty stricken black people queuing up for food. Is this fair? The poster in the photograph reads 'world's highest standard of living', people queuing for a meal whilst others are laden with endless luxuries, is this the highest standard of living? Although there were several agencies aiming to help the farmers, for example the Tennessee Valley Authority which intended to help the farmers out of depression giving them loans and better machinery, black farmers were still unfairly treated not receiving any of this help. The white workers on the other hand benefited greatly from the agencies, they provided vast help to raising the unemployment levels and America's wealth. White farmers were saved from the depression and given every possible bit of help to get through the 1930's whilst the Black people were left to be attacked, physically and emotionally until as late as the 1960's when conditions began to improve. So it is understandable why the black and white people of America express different views and in all probability always will. To conclude, there were many disputes over the effects of the New Deal, most of which were a matter of opinion and beliefs but even today people are still discussing it. It must be considered, how reliable and biased are the sources I have mentioned? It would be impossible to find a factual and accurate source, which supported both sides of the story, so just put it into perspective that every opinion is either saying Roosevelt and the New Deal is an improvement or a weakness. Whatever different people believe it cannot be denied that the New Deal did eventually aid America and help her on her way to regain the great power and wealth she once had, but it will never be forgotten what F.D.R left out, he could have done so much more to help the black people, the Chinese and the Native Americans but he didn't. By Lauren Simpson ...read more.