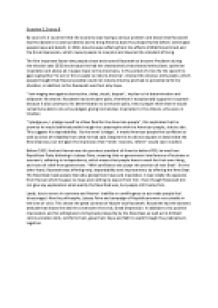 ﻿Question 5, Source B By source B, it could tell that the economy was having a serious problem and shows that Roosevelt had the dynamic to solve problems and to bring America back the prosperity like before, which gave people hope and beliefs. In 1932, America was suffering from the effects of Wall Street Crash and the Great depression, which caused people to lose jobs and lowered the standard of living. The first important factor why people chose and trusted Roosevelt to become President during the election year 1932 was because he had the characteristic that showed enthusiasm, optimism inspiration and above all, he gave hope to the Americans, in the period of crisis. ...read more.

?I pledge you, I pledge myself to a New Deal for the American people?, this explicates that he promise he would definitely walk through the catastrophe with the American people, side by side. This suggests his dependability. By the word ?pledge?, it made American people feel confident as well as sense of reliability from what he had said. Despite this he did not explain in detail what the New Deal was, but still gave the impression that ?relief, recovery, reform? would soon reached. Before 1932, Herbert Hoover was the previous president of America before FDR, he was from Republican Party believing in Laissez Faire, meaning that no government interference of business or economic, adhering in independency, which means that people have to work for their own living , and none of relief from government. ...read more.

Even though Roosevelt did not give any explanation what exactly the New Deal was, but people still trusted him. Lastly, due to errors in economy and Hoover? inability or unwillingness to act made people feel discouraged. Also the philosophy, Laissez Faire and campaign of Republicans were not suitable in the time of crisis. This shows the great contrast of Hoover and Roosevelt. Roosevelt had the dynamic attitude that shows the desire to overcome the crisis, Great Depression. In addition to his positive impressions and his willingness to bring back prosperity by the New Deal, as well as his brilliant communication skills, comforts them, gave them hope and faith to walk through the predicament, together. ...read more.