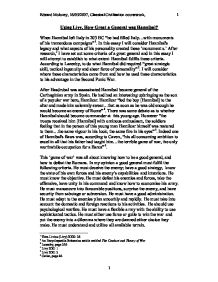 Using Livy, How Great a General was Hannibal?

Using Livy, How Great a General was Hannibal? When Hannibal left Italy in 203 BC "he had filled Italy...with monuments of his tremendous campaigns"1. In this essay I will consider Hannibal's legacy and what aspects of his personality created these 'monuments.' After research,2 I have set out some criteria of a great general and in this essay I will attempt to establish to what extent Hannibal fulfils these criteria. According to Lazenby, to do what Hannibal did required "great strategic skill, tactical ingenuity and sheer force of personality"3. I will consider where these characteristics came from and how he used these characteristics to his advantage in the Second Punic War. After Hasdrubal was assassinated Hannibal became general of the Carthaginian army in Spain. He had had an interesting upbringing as the son of a popular war hero, Hamilcar. Hamilcar "led the boy [Hannibal] to the altar and made him solemnly swear...that as soon as he was old enough he would become an enemy of Rome"4. There was some debate as to whether Hannibal should become commander at this young age. However "the troops received him [Hannibal] with ominous enthusiasm, the soldiers feeling that in the person of this young man Hamilcar himself was restored to them...the same vigour in his look, the same fire in his eyes"5. Indeed one of Hannibal's flaws was, according to Caven, "his all consuming ambition to excel in all that his father had taught him...the terrible game of war, the only worthwhile occupation for a Barca"6. This 'game of war' was all about knowing how to be a good general, and how to defeat the Romans. In my opinion a good general must fulfil the following criteria. He must deceive the enemy; have a good strategy, know the state of his own forces and his enemy's capabilities and intentions. He must know the objective. He must defeat his enemies and forces, take the offensive, have unity in his command and know how to economise his army. ...read more.

Longus engaged the Carthaginians exactly where Hannibal wanted him to and was ensnared in his trap. The Romans were annihilated. This battle shows for the first time Hannibal's use of deception. He utilised the terrain to his advantage. Needing "a resounding victory to maintain the morale of his men and the enthusiasm and war-like spirit of the Gauls"12, Hannibal had taken a risk by isolating his Numidian horsemen from the rest of his troops. "Hannibal was always inclined by temperament to favour the unexpected solution"13. There were many consequences of this battle. Many Gauls flocked to support Hannibal. Rome started a defensive (but not Fabian) policy, putting garrisons at strategic points throughout Italy. After wintering his men in the Po valley Hannibal marched through marshy countryside for four days and three nights. Many horses and pack animals died. Hannibal lost his sight in one eye. He knew the condition of his men was bad, and so rested them, again showing this key aspect of good generalship. He "collected information about the enemy"14. He knew he was likely to face Flaminus (one of the consuls) at Arretium. Flaminus was "absurdly overconfident"15. Hannibal walked straight past Flaminus, burning and pillaging the region, and tormented the Roman troops. Hannibal was again using psychological warfare. Flaminus was pulled into a huge trap at the Battle of Trasimene in 217 BC. 15,000 Romans were killed. Of the captured soldiers only the allies of Rome were set free, encouraging schisms in the alliance system. The next major encounter was at the battle of Cannae in 216 BC. It was to be his most famous victory. The term of office for the Dictator Fabius had come to an end and the consuls Varro and Paullus were elected. Varro is depicted as being reckless, arrogant and inexperienced militarily. Paullus was a cautious, sensible and experienced patrician. Hannibal met Varro and Paullus outside Cannae. ...read more.

This weakness was evidenced at the battle of Zama. The armies were quite even, in size and training. Scipio Africanus, the general of the Roman troops had taught his forces Hannibal's tactics. He had acquired Numidian horsemen gaving him the advantage over Hannibal. It was Cannae in reverse. Hannibal was defeated for the first time ever. I believe this was because he did not choose the battleground well. There were no features he could use to hide his troops, or to stop himself from being outflanked. However Polybius says that "Hannibal had achieved the distinction of having drawn his line on that day with remarkable skill"19 using his veterans as a van-guard. In conclusion we can see that Hannibal fulfils all of my criteria for being a great general except for a few. He fails in his dealings with Roman allies - he underestimated Rome's capabilities and there grip on their allies. He failed to secure his supply lines - this is an administrative failure. He also failed to prioritise his objectives - he cannot see any other way to defeat Rome other than splitting it from its Allies. He fulfilled all the other criteria that I set out. He is one of the best generals ever. 3, 569 words. 1 Titus Livius (Livy) XXX: 28 2 An Encyclopaedia Britannica article entitled The Conduct and Theory of War 3 Lazenby, page 256 4 Livy XXI: 1 5 Livy XXI: 2 6 Caven, page 86 7 Polybius III: 17 * However, it was never Hannibal's plan to cross the Alps. This aspect of the journey occurred because of Scipio's blocking of the normal route. 8 An Encyclopaedia Britannica article entitled The Conduct and Theory of War 9 Polybius III: 67 10 Polybius III: 70 11 Polybius III: 70 12 Pamela Bradley, page 138 13 Polybius III: 78 14 Polybius III: 80 15 Polybius III: 80 16 Polybius III: 48 17 Polybius III: 17 18 Livy XXII: 51 19 Poybius XV: 12 Edward Moloney, 16/05/2007, Classical Civilisation coursework, 1 1 ...read more.