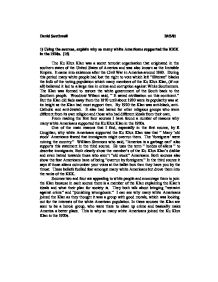 Using the sources, explain why so many white Americans supported the KKK in the 1920s.

David Southwell 29/5/01 1) Using the sources, explain why so many white Americans supported the KKK in the 1920s. [15] The Ku Klux Klan was a secret terrorist organisation that originated in the southern states of the United States of America and was also known as the Invisible Empire. It came into existence after the Civil War in America around 1860. During this period many white people had lost the right to vote which left "illiterate" blacks the bulk of the voting population which many members of the Ku Klux Klan, (if not all) ...read more.

It also had hatred for other religious groups who were different from its own religion and those who had different ideals from their own. From reading the first four sources I have found a number of reasons why many white Americans supported the Ku Klux Klan in the 1920s. One of the main reasons that I find, especially in the first source, by R Coughlan, why white Americans supported the Ku Klux Klan was that " Many 'old stock' Americans feared that immigrants might overrun them. The 'foreigners' were ruining the country." William Simmons who said, "America is a garbage can" also supports this statement in the third source. ...read more.

Sources two and four are appealing to white people and encourage them to join the Klan because in each source there is a member of the Klan explaining the Klan's ideals and what their plan for society is. They both talk about bringing "restraint against crime" and "punishing wrongdoers." I can see why many white Americans joined the Klan as they thought it was a group with good morals, which was looking out for the interests of the white American population. In these sources the Klan are seen to be a heroic group, who were there to clean up crime and basically make America a better place. This is why so many white Americans joined the Ku Klux Klan in the 1920s. ...read more.