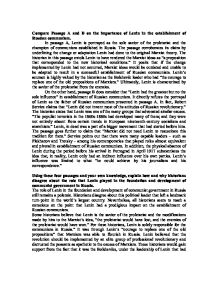 Using these four passages and your own knowledge, explain how and why historians disagree about the role that Lenin played in the foundation and development of communist government in Russia.

Compare Passage A and B on the importance of Lenin in the establishment of Russian communism. In passage A, Lenin is portrayed as the sole savior of the proletariat and the champion of communism established in Russia. The passage corroborates its claim by underlining the change or adaptation Lenin had done to the original Marxist theory. The historian in this passage extols Lenin to have rendered the Marxist ideas as "a proposition that corresponded to the new historical conditions." It posits that if the change implemented by Lenin had not occurred, Marxist ideas would be outdated and unable to be adapted to result in a successful establishment of Russian communism. Lenin's acumen is highly valued by the historian as the Bolshevik leader who had "the courage to replace one of the old propositions of Marxism." Ultimately, Lenin is characterized by the savior of the proletariat from the enemies. On the other hand, passage B does consider that "Lenin had the greatest but no the sole influence" in establishment of Russian communism. It directly refutes the portrayal of Lenin as the father of Russian communism presented in passage A. In fact, Robert Service claims that "Lenin did not invent most of the attitudes of Russian revolutionary." The historian states that Lenin was one of the many groups that advocated similar causes. ...read more.

Lenin, indeed, never was part of the Soviets. Perhaps Lenin does deserve to be acknowledged as having the "greatest influence" through his leadership and propaganda that antagonized the provisional government and won the support of the people, but other contemporaries such as Trotsky played almost an equal role in capsizing the Provisional Government to give birth to the communist order (Source B). On the other hand, some historians portray Lenin as "the natural leader of the party" but a leader that "had to reaffirm his credentials repeatedly." These historians provide instances where Lenin's views were not accepted by the other members of the Bolshevik parties. In reality many factions existed within the party where "members could cultivate their own constituencies." Other contemporary leaders of the party include Zinoviev, Kamenev, Trotsky, Tomsky and Stalin. A historical evidence that could authenticate that Lenin's views were not always accepted. When Lenin wrote his April Thesis in 1917, the Bolshevik party refused to publish it in its own newspapers as the members thought that these ideas were too radical. They were afraid of the possible backlashes by publishing Lenin's programs. Another historical instance where Lenin's program caused polemic inside his communist party was his issue of New Economic Policy in 1921. Almost all the members of the party rejected this policy as "capitalist." ...read more.

and Lenin. Also, the translation of this document into English could be a problem, depending on the level of accuracy of the translation. On the other hand, Source B, written by Robert Service, a British historian, is a secondary source, published in 1997. Source B is a passage from Critical Companion to the Russian Revolution (ed. Acton, Chernaiev and Rosenberg). The book was written with the purpose to provide and emphasize that a strong revolutionary tradition existed in Russia before Lenin came upon the scene to students. This source is particularly valuable in that it is written by a non-Russian historian, thus, adding objectivity to the interpretations put forth since the historian is not writing his native history. In addition, it has many editors who revised this source, and therefore is more convincing since there are four historians corroborating the document. Also, the source is quite recent compared to Source A which was published in 1938. Nonetheless, this source also has limitations. The fact that the Source B is a secondary source is a weakness. In addition, the source possibly does not give insights to the Russian perspective as much detailed or more as a source that would be written by a Russian historian. Moreover, Source B seems to be anti-Lenin and give little credit to Lenin for his role in establishing Communism in Russia; thus there might be some subjectivity in this document. ...read more.