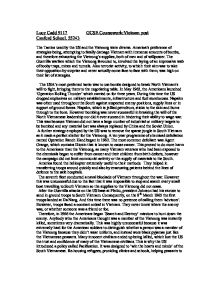 Vietnam. The Tactics used by the US and the Vietcong were diverse. Americas preference of strategies being, attempting to fatally damage Vietnam with immense amounts of bombs

Lucy Cadd 9117 GCSE Coursework:Vietnam post Canford School, 55243 The Tactics used by the US and the Vietcong were diverse. America's preference of strategies being, attempting to fatally damage Vietnam with immense amounts of bombs, and therefore exhausting the Vietcong's supplies, both of men and of willpower. The Guerrilla warfare which the Vietcong favoured to, involved the laying of an impressive web of booby traps, mines and tunnels. Also terrorist activity, to which their aim was to take their opposition by surprise and never actually come face to face with them, was high on their list of strategies. The USA's most preferred tactic was to use bombs designed to break North Vietnam's will to fight, bringing them to the negotiating table. In May 1965, the Americans launched 'Operation Rolling Thunder' which carried on for three years. During this time the US dropped explosives on military establishments, infrastructure and fuel storehouses. Napalm was often used throughout the South against suspected enemy positions, supply lines or in support of ground forces. Napalm, which is jellied petroleum, sticks to the skin and burns through to the bone. However bombing was never successful in breaking the will of the North Vietnamese leadership nor did it ever succeed in hindering their ability to wage war. ...read more.

Anybody who the Americans thought was a member of the Vietcong was instantly killed, sometimes very dramatically. This was highly unsuccessful because it was extremely hard for the American soldiers to distinguish whether a person was a member of the Vietcong because they didn't wear uniform, and instead wore black pyjamas just like the Vietnamese peasants. Many innocent civilians ended up being killed, which lost the US the trust and confidence of many of the Vietnamese civilians. This is why the US introduced a policy called Pacification. It was designed to 'win the hearts and minds' of the South Vietnamese. Re-housing refugees, providing clinics and schools, helping peasants to build new infrastructure canals and drainage ditches were important parts of this policy. This scheme had rather more success than the Search and Destroy missions. An ineffective tactic was the 'strategic hamlet' policy. The intention was to keep the Vietnamese peasants in fortified areas where they could not be terrorised into giving food and shelter to the Vietcong. This brutally demoralised the peasants cutting them away from their villages and fields. Focusing on the Vietcong tactics, perhaps one of the cleverest being the Ho Chi Minh Trail, which was used to send guerrillas, weapons, equipment and food to the Vietcong in the South. ...read more.

In September 1967, the NLF launched a series of attacks on American Garrisons. General Westmoreland was delighted that the NLF were at last engaging in open combat. He was able to report that the NLF had lost 90,000 men and that as the NLF were unable to replace such numbers that the end of the war was near. However, on 31st January 1968, 70,000 members of the NLF launched a surprise attack on more than a hundred cities and towns in Vietnam. It was now clear that the purpose of those attacks in September had been to draw out troops from the cities. The Tet offensive was crucial to both sides. 37,000 NLF soldiers were killed compared to 2,500 Americans. However, it also illustrated how inexhaustible the supplies were of men and women willing to fight for the overthrow of the South Vietnamese government. A new plan called 'Vietnamization' was introduced in 1968. The idea was to encourage the South Vietnamese to take more responsibility for fighting the war. It was hoped that this policy would eventually enable the US to gradually withdraw all of their soldiers from Vietnam. However, few wanted to fight a war that America was abandoning. 'Search and destroy' missions became 'search and avoid' operations. And the general morale of the troops was completely disintegrated. ...read more.