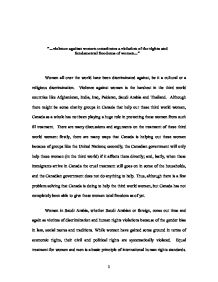 &quot;...violence against women constitutes a violation of the rights and fundamental freedoms of women...&quot;

"...violence against women constitutes a violation of the rights and fundamental freedoms of women..." Women all over the world have been discriminated against, be it a cultural or a religious discrimination. Violence against women is the harshest in the third world countries like Afghanistan, India, Iraq, Pakistan, Saudi Arabia and Thailand. Although there might be some charity groups in Canada that help out these third world women, Canada as a whole has not been playing a huge role in protecting these women from such ill treatment. There are many discussions and arguments on the treatment of these third world women: firstly, there are many ways that Canada is helping out these women because of groups like the United Nations; secondly, the Canadian government will only help these women (in the third world) if it affects them directly; and, lastly, when these immigrants arrive in Canada the cruel treatment still goes on in some of the households, and the Canadian government does not do anything to help. Thus, although there is a few problem solving that Canada is doing to help the third world women, but Canada has not completely been able to give these women total freedom as of yet. Women in Saudi Arabia, whether Saudi Arabian or foreign, come out time and again as victims of discrimination and human rights violations because of the gender bias in law, social mores and traditions. ...read more.

Canada's support to governments in Southeast Asia as they address women's rights and equality will help to empower women in the region" (http://www.acdi-cida.gc.ca/cida_ind.nsf/). Canada, through the Canadian International Development Agency (CIDA), will contribute $10.4 million to help governments in seven countries in Southeast Asia to promote and protect women's rights. Therefore, although Canada has started to help out, for a lot of women in the third world, it is already too late. It appears that the Canadian government will only help these women (in the third world) if it affects them directly. If, somehow, the ill treatment of these third world women is affecting the Canadian economy, then Canada will help them out. Almost all countries follow similar policies, especially the United States; they claimed that they set the Afghan women free of the Taliban regime, but they only did it for their own personal reasons, then took the credit for freeing those women. Canada believes that because the suffering of these women is not hurting them, they do not need to do anything about it. The only way any country takes action is always through war and force. Although there are charities like Amnesty International, who fights for human rights, there are not enough, and the Canadian government as a whole is not helping as much as they really could. ...read more.

Because of tough and immoral regimes, most of these women are not even allowed out of their own homes, to get food, become educated; they cannot become anything. A lot of countries are too proud to help the third world, and they will use war as an excuse for anything. Canada has joined the United Nations in helping out a lot of these women in the third world, but the agreement was signed only on April of 2000. There have been many women who have lost their lives before this date. Thousands of women die everyday; Canada, and many other countries only help out these third world women if their problems affect Canada directly. The immigrants who come over to Canada to get away from those harsh conditions in their countries expect to live better lives, but Canada does not educate these families. More than half of these women still live in patriarchal families and are not allowed to go out without the "barqa" on (being fully covered) or without male accompaniment (usually husband or father). So, although Canada has started to help these women out, it is not enough at this moment. They need to work harder and faster if they do not want more harsh treatment for these third world women. Canada should create more charities to raise money and awareness for the issues these women are facing. The main idea should be creating more awareness so the Canadian society could start helping these women on there own. ...read more.