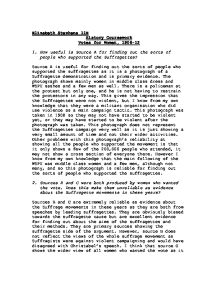 Elizabeth Stephens 11N History Coursework Votes for Women, 1908-12 1. How useful is Source A for finding out the sorts of people who supported the Suffragettes? Source A is useful for finding out the sorts of people who supported the suffragettes as it is a photograph of a Suffragette demonstration and is primary evidence. The photograph shows mainly women in middle class dress and WSPU sashes and a few men as well. There is a policeman at the protest but only one, and he is not having to restrain the protestors in any way. This gives the impression that the Suffragettes were not violent, but I know from my own knowledge that they were a militant organisation who did use violence as a main campaign tactic. This photograph was taken in 1908 so they may not have started to be violent yet, or they may have started to be violent after the photograph was taken. This photograph does not represent the Suffragettes campaign very well as it is just showing a very small amount of time and not their wider activities. Other problems with this photograph's reliability at showing all the people who supported the movement is that it only shows a few of the 200,000 people who attended, it may not show a cross section of everyone there. ...read more.

It is just the opposite, for a woman will learn to give a larger meaning to her traditional duties." She feels that women have important views in some issues that are more valid than those of men because women have more experience in some areas such as domestic duties. 5. Many people today consider that the fight for women's right to vote was a key issue in British politics before 1914. There is plenty of evidence to support this interpretation. Why then does the historian in Source F give a very different interpretation? Source F comes from a book written about social history, not political history. It does not show what was happening in newspapers, it shows what most people thought about their lives. The suffragettes were by no means a majority, they were a relatively small group of middle class women who had a lot of publicity. According to source F, "The majority of women at this time did not see their freedom in terms of entry to politics". They just wanted to improve their lives in their current spheres and so joined organisations such as the Mother's Union. This was the most successful women's organisation of the time, the women who joined it "campaigned for greater protection, dignity and status for women, in marriage, motherhood and the home. ...read more.

We also have to remember that some women were actually against women having the vote and joined the anti-suffrage league. The other sources do not tell us about who supported the cause, they give us other information such as tactics and reasons for wanting the vote. I know from my own knowledge that the majority of women's suffrage supporters were women but I don't know if the majority of women wanted the vote. I know that the majority of men opposed women's suffrage because they felt threatened by it and felt that women were not able to have valid opinions because they were too emotional and unstable, they thought that if women became more career minded they would neglect their domestic duties. Other arguments against women voting were that women did not fight for their country so they shouldn't be allowed to vote either, they did not take into account the fact that women were not allowed to fight for their country even if they wanted to. Some male politicians were sympathetic to the women's suffrage cause but were put off helping them because of they way the suffragettes conducted themselves. Some were even moved to changing their opinions entirely and developed the opinion that women were not responsible enough to have the vote at all. Overall from these sources there is not enough evidence to say whether the statement is correct. ...read more.