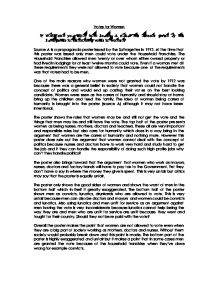 Votes for Women 1. What can you learn form Source A about the reasons given by the Suffragettes for demanding votes for women? Source A is a propaganda poster issued by the Suffragettes in 1912. At the time that this poster was issued only men could vote under the Household Franchise. The Household Franchise allowed men twenty or over whom either owned property or had lived in lodgings for at least twelve months could vote. Even if a woman met all these requirements they were not allowed to vote because one of the requirements was that voters had to be men. One of the main reasons why women were not granted the vote by 1912 was because there was a general belief in society that women could not handle the concept of politics and would end up casting their votes on the best looking candidate. Women were seen as the carers of humanity and should stay at home bring up the children and feed the family. The idea of women being carers of humanity is brought into the poster (source A) although it may not have been intentional. The poster shows the roles that women may be and still not get the vote and the things that men may be and still have the vote. The top half of the poster presents women as being nurses, mothers, doctors and teachers. These all are very important and responsible roles but also care for humanity which does in a way bring in the argument that women are the carers of humanity and nothing more. However this poster does rule out the argument that women cannot deal with the concept of politics because nurses and doctors have to work very hard and study hard to get the job and if they can handle the responsibility of doing such high profile jobs why can't they handle politics? ...read more.

Most men felt that they were superior to women and this is brought out in source E where a Member of Parliament talks about voting against the women's suffrage in fear that they would take over rule of the country. Men felt that that would be a disgrace and could not being allowed to happen under any circumstances. The source also suggests that women are not capable off dealing with politics and are too emotional. However in 1910 women aged thirty and property owners nearly got the vote when the Conciliation Bill got through a few sittings but it was outvoted by the Liberals because they felt that if they gave the vote to these women they would be giving the Conservatives more voters. However the main reason why women did not get the vote before the outbreak of the First World War was because it was just not an important enough issue for the Liberal Government. The Liberals were trying to bring in new reforms. High on their list was bringing in old age pensions, sick pay and welfare reforms. Of course all this meant that the tax rate would go up which the Conservatives were against. So the Liberals put a great fight that they did eventually win. The Liberals also had other priorities they had do deal with including a political battle over Ireland. Large parts of Ireland were demanding home rule for their country to be free. Many Irish citizens held demonstrations and protests which the Liberals had to deal with. All this resulted in the topic of the women's suffrage being at the bottom of the Government's priorities. The Liberal always planned to bring it up but there were always more important matters to be dealt with. In answer to the question, women did not gain the vote by the outbreak of the First World War for a number of reasons, the most important of which I believe to be the fact that the Liberal Government had more important priorities to deal with. ...read more.

In the speech Asquith appears to have changed his attitude to women. He recognises the huge part women has played in the war and felt the need to reward them. He also touches on the fact that the WSPU had stopped their militant campaign. The people of Britain did not want a return of the militant campaign of the WSPU and for a start the Government could not handle another violent campaign. After the war Britain was exhausted and financially broken. They could not face another wave of attacks and so to avoid a return of them an extra bit was added to the Representation of People Act allowing some women to get the vote. The attacks from the WSPU may not have returned but he Government decided not to take the risk. One thing that all the sources failed to mention was that there was a catch. Although all men could vote after 1918 women could not. If women wanted to vote they had to be aged over thirty and own property. The conditions were put in place so that men were still the majority voters and the Government believed that women over the age of thirty were more mature and would probably vote the same as their husbands. Also in a way the Household Franchise still lived on because before the war men could vote under the Franchise if they owned property and after the war this condition was moved onto women. Overall there are many reasons that led up to some women getting the vote. It was not just the work they did during that war that got them the vote. It played a major part in it but there were other factors including the fact that public opinion had changed and fear of the return of a militant campaign by the WSPU. However the vote was given only to women over the age of thirty so women still had a fight to move the voting age down to twenty one, the same as men, which didn't come about until 1928. ?? ?? ?? ?? ...read more.