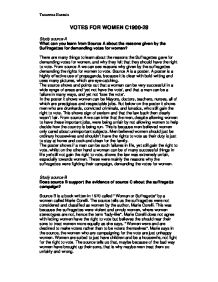 VOTES FOR WOMEN C1900-28 Study source A What can you learn from Source A about the reasons given by the Suffragettes for demanding votes for women? There are many things to learn about the reasons the Suffragettes gave for demanding votes for women, and why they felt that they should have the right to vote. From source A we can see reasons why given by the suffragettes demanding the rights for women to vote. Source A is a poster. A poster is a highly effective use of propaganda, because it is clear with bold writing and uses many pictures, which are eye-catching. The source shows and points out that a woman can be very successful in a wide range of areas and 'yet not have the vote', and that a man can be a failure in many ways, and yet not 'lose the vote'. In the poster it shows women can be Mayors, doctors, teachers, nurses, all of which are prestigious and respectable jobs. But below on the poster it shows men who are drunkards, convicted criminals, and lunatics, who still gain the right to vote. This shows sign of sexism and that the law back then clearly wasn't fair. From source A we can infer that the men, despite allowing women to have these important jobs, were being unfair by not allowing women to help decide how the country is being run. This is because men believed women only cared about unimportant subjects. ...read more.

The MP, who the speech was from, was a man of high class and disagreed with giving women the right to vote therefore the government rejected the idea. The opinion of this MP was the same as majority of the other Mps around, as many of these Mps were afraid of women coming into powerful occupations. They thought women in control of a country was a terrible idea as they think women cannot even think for themselves let alone run a country. The government were worried about the women taking over and being the ones in control and power. Also many of these Mps were stubborn, sexist and single minded therefore they wouldn't allow women to gain the right to vote. Other reasons for women not getting the vote by 1914 are because of the bad behaviour the suffragettes caused. This had only given the women the name of aggressive and out of control people who did not suit something as politically important such as the vote. The women had been putting off their supporters. They had damaged their cause as they gave a reason, that they had irrational methods of getting women suffrage, for rejecting women's right to vote. Study sources F & G How are useful are these two sources as evidence for the contribution of women to the war effort in the years 1914-1918? Source F is a poster of which is government propaganda produced in 1916 to make women want to join the "women munitions workers". ...read more.

every service during this war except that of fighting" He previously opposed women's votes before the war as Suffragettes had been doing their horrible campaign of violence. However this attitude hadn't been proved changed by this, as he only though some measures of women's suffrage should have occurred not all women should have it in other words, he only now agreed to let them vote as a reward for their "service during the war" not because they were entitled to it nor had the right to it. The work women did during WWI did have a massive impact on their cause. They had access to jobs that were never before available to women, like bus drivers, postal workers, farmers and delivering coal. Women were meant to be feeble, delicate and weak. They succeeded in heavy work and in jobs needing skill like working in engineering workshops. Women working as such things like their vital contribution to the munitions industry, stood out in peoples minds. As the government had talked of creating a land fit for heroes when the soldiers returned from the war, the right to vote had become of the many changes to take place as surely women were heroes for helping. After the war, the politicians had not felt like having all that fighting from the wartime then going to the days where women Suffragettes and Suffragists would harass and pressure the government to let them to vote, so giving women the vote after the war was a quick and simple solution to settle down after the war too. Tanzeena Hussain ...read more.